Timeline of how Waffle House shooter got confiscated guns back 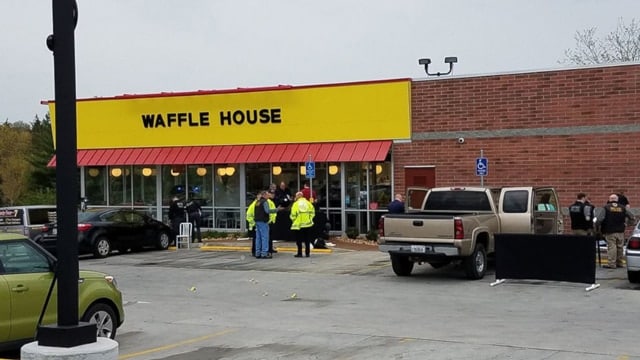 The man accused of gunning down six people at a Nashville area Waffle House over the weekend used a rifle confiscated by police last year.

“The strongest relinquishment laws provide a formal procedure for law enforcement officers to remove and retain custody of firearms when a firearm owner becomes ineligible to possess them,” Nichols wrote. “Some state laws allow a third party, including a family member, to hold onto the guns when a person loses his or her gun eligibility. The shooting at the Waffle House in Nashville, Tennessee demonstrates the risks of such a procedure. It is often too easy for the person to retake possession of the guns through persuasion, coercion, or theft.”

The FBI revoked Reinking’s FOID card — required in his home state of Illinois for gun ownership — after the Secret Service arrested him for trespassing near the White House in July. Nichols also cites a May 2016 police report alleging Reinking’s family described him as suicidal and said he believed Taylor Swift was stalking him.

When deputies in Tazewell County, Illinois, seized the Reinking’s firearms last year, however, his father asked to take the guns and agreed to keep them away from his son. He’s since admitted to Nashville police he returned the guns to Reinking before he moved to Tennessee last fall.

Nichols said Reinking’s father “may be guilty of aiding and abetting” him in Sunday’s crime. “The shooter’s father may have violated Illinois law by transferring the guns back to the shooter,” she said. “Although Illinois’s background check requirement includes an exception for transfers ‘of ownership’ to family members, a separate provision of Illinois law prohibits transferring ownership of a firearm to someone the transferor knows does not possess a FOID Card. This provision does not have an exception for transfers to family members, but does not apply to temporary transfers (loans), making it difficult to enforce.”

In Tennessee, however, residents don’t need licenses to buy firearms or legally own them. Prohibited purchasers include those adjudicated mentally ill — a key factor inapplicable to Reinking.

Nichols said the case illustrates the need for more extreme risk protection order laws and “the importance of ensuring that people who are subject to those removal/ERPO laws because they are a clear danger with a gun actually relinquish their guns to a licensed dealer or law enforcement, instead of a friend or family member.”

Four people died Sunday when Reinking opened fire at the restaurant just before 3:30 a.m., armed with an AR-15 and two magazines. A patron charged the half-naked gunman during a pause in the attack, wrestling the rifle away from him and tossing it over a counter. Law enforcement said Reinking fled the scene after the scuffle and evaded capture for more than a day afterward.

Police arrested Reinking Monday afternoon near his apartment and charged him with four counts of criminal homicide. A loaded pistol was recovered from a backpack during the arrest, according to law enforcement.

Nashville Police Chief Steven Anderson didn’t describe a motive Sunday, but suggested the gunman may have “mental issues.” Reinking remains in custody in lieu of a $2 million bond and will make his first scheduled court appearance Wednesday.