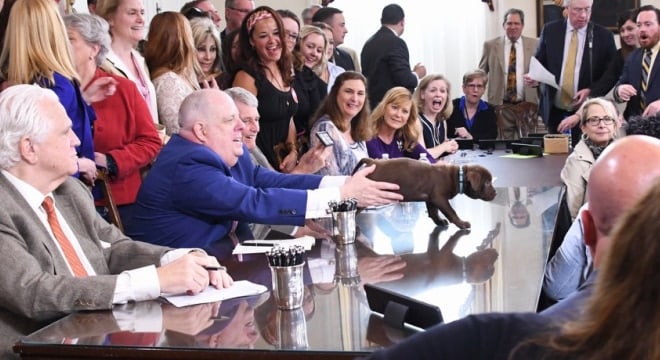 With over 200 bills signed Tuesday, ranging from animal welfare laws to gun measures, the Baltimore Humane Society was on hand with puppies for the event, with Gov. Hogan shown with one in hand. (Photo: Maryland Governor’s Office)

Gov. Larry Hogan, a Republican, approved a stack of pending legislation on Tuesday including several championed by gun control advocates.

House Bill 432 sets aside $10 million in funding to establish the Maryland Violence Intervention and Prevention Advisory Council. Backed by the Giffords group and Baltimore area lawmakers, the Council would approve grants to local governments and non-profits to fund health programs aimed at “violence reduction” and “gun violence prevention.” The bill was approved unanimously in the state Senate and 116-23 in the House.

House Bill 888 bans what are now classified under Maryland law as rapid fire trigger activators, defined as bump stocks, binary trigger systems, burst triggers and trigger cranks. The language of the bill excludes replacement semi-auto triggers meant simply to improve the performance of a firearm. Those with devices in their possession prior to October can keep them, provided they comply with as-yet unwritten federal requirements. Violators face three years in prison and a $5,000 fine. The National Rifle Association characterized the move as “broad and overreaching.” The proposal passed 128-7 in the House and 35-11 in the Senate.

House Bill 1646 mandates that individuals convicted of domestic abuse crimes in the state transfer within two days any guns they possess to a federally licensed firearms dealer, with law enforcement verifying the move and the court notified in turn. Gun control advocates argued the bill was needed to close “dangerous loopholes” in state law that can leave guns in the hands of those who legally had them prior to their convictions. The measure passed unanimously in the Senate and 135-4 in the House.

House Bill 1302, characterized by supporters as a “red flag” law, would establish Extreme Risk Protective Orders, a mechanism where police or family of an individual can petition the court to grant a temporary order seizing the guns of someone thought to be at risk to themselves or others. Supported by gun national gun control advocates, the NRA said the legislation “lacks basic due process protections and is ripe for abuse.” The bill was the most contentious of the gun control measures approved by the legislature, passing the House 93-46 and the Senate 31-13.