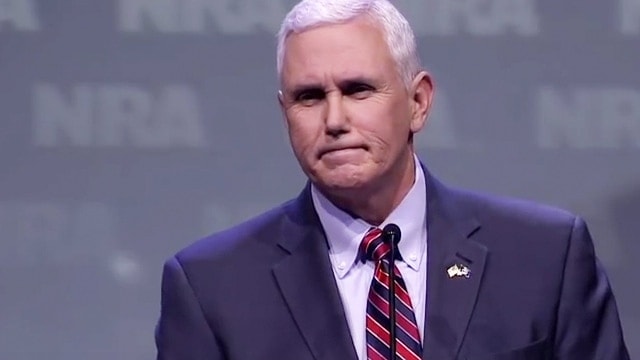 Mike Pence, when he was governor of Indiana, speaking at the NRA convention in Louisville in 2016. (Photo: NRA-TV)

Vice President Mike Pence will speak in Dallas next week at the National Rifle Association’s annual meeting, the organization said in an announcement Tuesday.

Executive director of NRA’s lobbying arm Chris Cox called it an “honor” to have Pence address members during the Leadership Forum as they kick off the 2018 election cycle.

“He is a lifetime supporter of the Second Amendment and he has a long a record of fighting to defend our freedoms,” Cox said. “Now more than ever we need principled people in public office who will fight to defend the Constitution.”

The event, scheduled for May 4, will spotlight a dozen or so speakers, most of which are fellow politicians and lawmakers, delivering stump speeches and often professing their love for the Second Amendment and NRA members.

President Trump made history when he headlined the event during last year’s NRA show. He was the first sitting president to appear at the event since President Ronald Reagan in 1983.

Pence last appeared at the NRA show during 2016’s presidential election cycle. At the event, the NRA became the first mainstream organization to endorse then Republican candidate Trump. However, Pence was not at the time Trump’s running mate. The organization would go on to spend more than $30 million in support of the Trump campaign.

Before that, Pence also appeared at the event in 2014 when the show was held in Indianapolis and Pence was the governor of Indiana. At the time, some wondered if Pence was considering a presidential bid.

The NRA Annual Meetings and Exhibits runs May 4-6 at the Kay Bailey Hutchinson Convention Center Arena in Dallas.