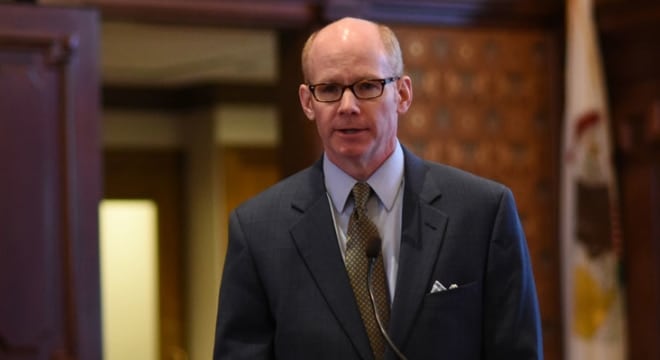 State Sen. Don Harmon, a Democrat who represents the Chicago adjacent village of Oak Park, says he will reintroduce the bill as an amendment to other legislation to keep it alive after a veto override ran out of time without action. (Photo: Ill. Senate Democrats)

Wednesday was the final day for the Senate to hold a vote to muscle through SB 1657 to the House for concurrence. Rauner had rejected the legislation saying it would add “a largely duplicative state level of licensing and regulation” to the already existing federal oversight on legal gun dealers without improving public safety. Supporters of the bill, who argued adding more regulation to gun shops would take weapons off Chicago’s streets, feel they had the numbers in the Senate to make a move, but couldn’t say the same about the House.

“While I am confident that I had the votes in the Senate to override the veto, I could not assure my colleagues that the House would vote against the governor, particularly given his vociferous and unreasonable opposition to this measure,” said state Sen. Don Harmon, D-Oak Park, who went on to say that he was reintroducing the measure as an amendment to another bill to keep it alive.

“Licensing gun dealers at the state level is a sensible step to reduce gun violence, and I will not give up. I am sure we will enact this measure – under this administration or the next,” Harmon said.

The bill was supported by Chicago city leaders, with Mayor Rahm Emanuel in the lead, and opposed by downstate Republicans, gun rights groups and firearms industry members.