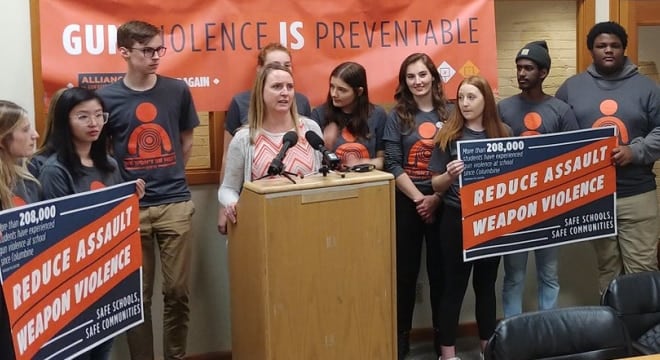 An anti-gun group is looking for Washington voters to approve a third set of sweeping regulations on firearms since 2014.

The proposal announced by the Alliance for Gun Responsibility would mandate new guidelines for semi-auto rifles under state law including fees, training requirements, waiting periods and additional background checks going beyond federal guidelines. The sponsors of the measure say it was designed to go after many of the “root causes of recent tragedies” by making it harder for people to get guns such as AR-15s.

“Gun violence is an avoidable epidemic and is far too common in our country and state,” said Renée Hopkins, CEO of the group. “Too many people have lost their lives to violence; too many families, children, and communities are rattled to the core. The people of Washington—from the kids marching for their lives, to their parents and grandparents who are calling their elected officials– demand action now.”

The 23-page initiative would set a definition under Washington law of an “assault rifle” simply as any that “utilizes a portion of the energy of a firing cartridge to extract the fired cartridge case and chamber the next round, and which requires a separate pull of the trigger to fire each cartridge,” which would effectively regulate all semi-auto longarms other than shotguns. The new requirements proposed alongside the definition would bar sales to those under 21 altogether.

To be eligible for an assault rifle under the plan, candidates would have to pass an enhanced background check, show proof of completing a safety training course within the last five years, pay up to a $25 fee, and wait at least 10 days before picking up the gun from a dealer. There would be no exception to those who already have a concealed carry permit or have legally purchased a rifle before.

In addition, gun shops would be required to both submit the information on the sale to the state and inform potential buyers of the increased risk of “injury, death by suicide, domestic violence and homicide,” due to having a firearm. Meanwhile, the Washington Department of Licensing would be tasked with keeping a running tab on registered assault rifle owners to make sure they remain eligible to possess the firearm. Finally, gun owners would be required to secure their firearms or risk “community endangerment” charges.

It should be noted that the majority of gun deaths in the state are suicides — at a rate higher than the national average — a fact that has led to unique laws allowing residents to voluntarily relinquish their gun rights and a program backed by Second Amendment groups to help promote suicide awareness.

Further, relatively few mass shootings have occurred in Washington and most of those have involved handguns and shotguns such as the Cafe Racer shooting in 2012, the so-called Carnation massacre in 2007 and the Capitol Hill massacre in 2006. According to FBI statistics, of the 195 homicides in the state in 2016, rifles were noted as the murder weapon in 11 instances, or about 5 percent– a figure half the rate attributed to knife crimes.

To make it to the ballot in November, the proposal needs to gather 259,622 eligible signatures from among Washington’s 4.2 million registered voters and have them submitted to the Secretary of State’s office by July 6.

The group fronting the effort passed I-594, an expanded background check initiative, in 2014, followed by I-1491, a measure to make it easier to temporarily seize guns from individuals seen as being at risk, in 2016. Both past efforts were paid for in large part by Everytown and a host of billionaire philanthropists. Gun rights groups vehemently opposed each attempt, and are against the new drive as well, with the National Rifle Association characterizing it as an “egregious attack” on Second Amendment rights.