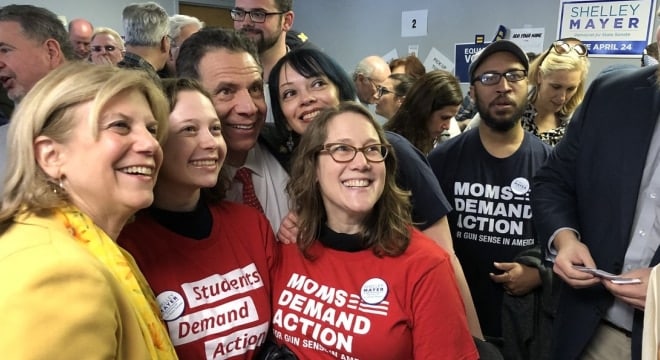 New York state government took a step towards single-party control with the victory Tuesday of a candidate strongly endorsed by gun control groups.

Democrat Shelley Mayer carried a special election victory to win a seat representing Westchester County, beating Republican candidate Julie Killian. This gave the Democrats, who already count Gov. Andrew Cuomo as a party member and control the Assembly, a one-seat majority in the state Senate. However, due to the fact that Brooklyn Democrat Simcha Felder announced he would continue to caucus with chamber Republicans, the GOP will retain control of the body. Nonetheless, Mayer’s win was trumpeted by national gun control organizations that supported her campaign.

“We are so excited to send gun sense champion Shelley Mayer to the state Senate,” said Nicole Lesser with Moms Demand Action. “Her victory is not only a win for the people of Westchester but all New Yorkers. We look forward to working with her this session on a variety of gun safety issues especially the passage of Extreme Risk Protection Order legislation which can save lives.”

Mayer, an Assemblymember, was backed by Everytown due to her “track record of standing up to the NRA and pushing through common-sense gun safety laws,” which included a measure barring the arming of teachers, promoting statewide gun “buyback” programs and further regulating concealed carry on public school campuses. As part of her campaign platform, Meyer said she would continue to support the controversial New York SAFE Act– which she voted in favor of in the Assembly in 2013 — and move to “break through Republican roadblocks for common sense legislation.”

This session has seen the GOP majority in the Senate narrowly swat away a series of gun control bills which were easily approved in the Democrat-controlled Assembly.

Mayer will take the open seat of former state Sen. George Latimer, who resigned to become Westchester County’s executive. Once Latimer took that office in January, among his first orders of business was to ban gun shows on county-owned property.