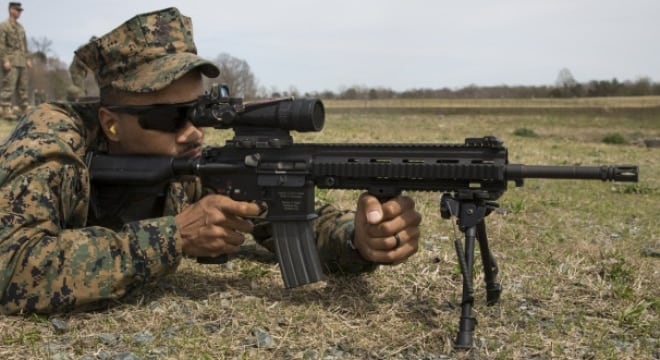 The M27, a select-fire variant of the HK416 5.56mm gas piston rifle, has been used in small quantities by the Marines for the past decade to replace some M249 Squad Automatic Weapons. The new contract, announced by Marine Corps Systems Command on Friday, allows for $29.4 million for a maximum 15,000 M27 systems and spare parts to be delivered by 2023.

The contract specifies that the lion’s share of the work on the platforms will be completed in Oberndorf, Germany with about 30 percent split between U.S.-based facilities in Columbus, Georgia and Ashburn, Virginia. HK earlier this year announced the Georgia expansion to include a new 50,000 square-foot manufacturing plant.

Citing commonality and interchangeability with existing platforms, the M27’s weight advantage over the M249, and the belief that pursuing a contract with any other maker besides Heckler & Koch would mean four years before the Corps received the additional weapons, the Marines decided to use HK as the sole provider of the contract in 2017 rather than opening it up to competition. The original purchase was open to a maximum of 50,814 M27s, reflecting Marine Corps Commandant Gen. Robert Neller’s assertions that he would like to arm every “0311” series rifleman with one of the rifles, replacing the M4.

The Marines are also on course to field the M38, an HK416 variant equipped with a Leupold TS-30A2 Mark 4 MR/T 2.5-8x36mm optic, as the new squad-designated marksman rifle. The standard optic on the M27 is the Trijicon ACOG.