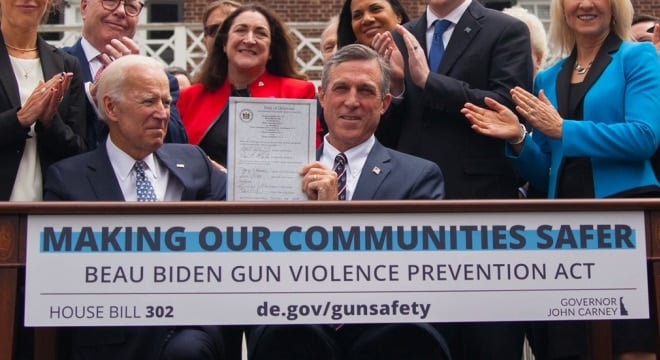 Vice President Joe Biden was on hand for the signing of “red flag” legislation into law by Delaware Gov. John Carney on Monday.

The Beau Biden Gun Violence Prevention Act, which passed the Democrat-controlled legislature as HB 302 on a unanimous vote, requires health care workers to report anyone they feel is a danger to themselves or others. Police, obligated to investigate, could then petition the courts to order the person to turn over their guns pending a hearing. Joe’s son, Beau, served as the state’s attorney general until his death in 2015 and had proposed a similar version of the measure in 2013.

“While that bill came up short of passage before we lost Beau, he was always confident that we would move in the right direction,” said the senior Biden at the event, held at the Biden Institute at the University of Delaware. “This bill will make the state of Delaware safer while safeguarding every Delawarean’s rights to due process. It is a fitting tribute to Beau’s legacy.”

In addition to the provision to temporarily take guns from those subject to a court order, HB 302 removes the firearms rights of some with a history of mental health treatment as well as those who were found not guilty by reason of insanity, guilty but mentally ill, or mentally incompetent to stand trial. Courts that issue surrender orders could also authorize officers to seize firearms and ammunition under some circumstances.

The law has the backing of the state Department of Health and Social Service, House Majority Leader Valerie Longhurst, Senate Majority Leader Margaret Rose Henry, and gun control groups to include the Delaware Coalition Against Gun Violence.

The Delaware State Sportsmans’ Association, the state’s NRA affiliate, supported the measure during the legislative process. “It’s not perfect, but it’s a good start that helps solve part of the puzzle,” said DSSA President Jeff Hague. “This deals with the people that are one of the causes of most gun violence involving mass murders rather than putting all the focus on an inanimate object.”

In opposition to the measure was the ACLU of Delaware, who argued the measure creates both constitutional issues and could pit police against potentially armed people in the midst of a mental health crisis without proper training.