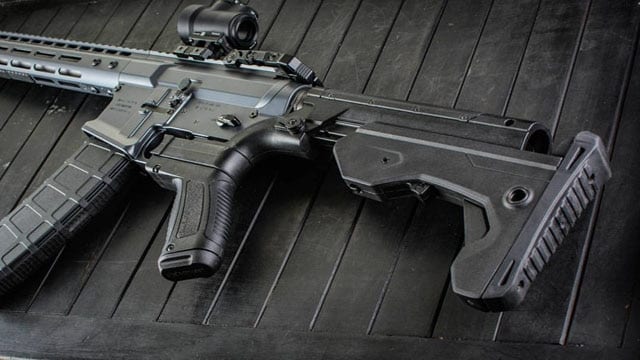 Maryland is at least the fourth state to ban bump stocks and similar devices after the Las Vegas shooting. (Photo: Slide Fire Solutions/Facebook)

The Bureau of Alcohol, Tobacco, Firearms and Explosives said last week it lacks the authority to register grandfathered bump stocks under a new Maryland law.

Gov. Larry Hogan signed HB 888 April 24, restricting the sale and possession of “rapid fire trigger activators”  in the state as of October 2019. The bill provides an exemption for current owners who register their device with the ATF via an authorization form — though the agency warns residents it can’t process such a request.

“Maryland residents who intend to file applications with ATF for ‘authorization’ to possess devices covered by the statute should be aware that ATF is without legal authority to accept and process such an application,” the agency said in an advisory last week. “Consequently, ATF respectfully requests that Maryland residents not file applications or other requests for ‘authorization’ from ATF to possess rapid fire trigger activators as defined in the State statute.  Any such applications or requests will be returned to the applicant without action.”

“The Las Vegas mass shooting exposed a pretty glaring loophole in Maryland gun laws,” said Delegate David Moon, sponsor of the bill. “We found you can circumvent the purpose of the assault weapons ban by putting the device on your gun.”