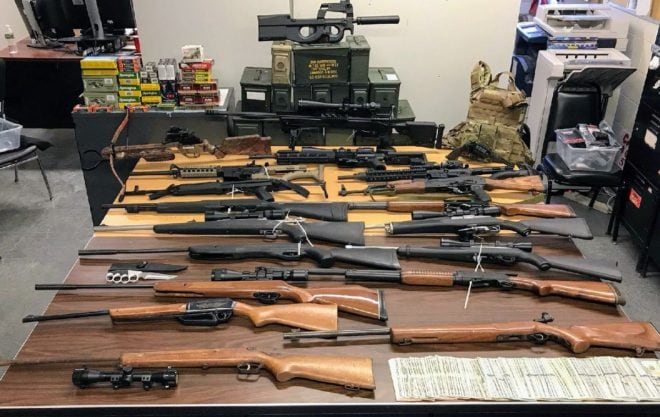 Keith Harvey, 44, was charged with dozens of weapons violations over what the Queens DA characterized as a “warehouse of lethal shotguns and rifles.” (Photo: 105th Prescient)

Officers with the New York Police Department’s 105th Precinct in Queens seized a table full of guns and an “enormous” amount of ammunition from an area man described by a neighbor as a collector.

“The defendant is accused of stockpiling an arsenal of deadly weapons in his home along with an enormous amount of ammunition,” Brown said. “Illegal firearms pose an extreme risk to the public and in Queens County creating your own warehouse of lethal shotguns and rifles will not be tolerated.”

The charges against Harvey include 14 counts of possession of rifles or shotguns without a permit, 29 assorted criminal weapon possession charges and unlawful possession of pistol or revolver ammunition. Arranged in Queens Criminal Court, Harvey’s bail was set at $150,000 and he faces as much as 25 years behind bars if convicted. However, his neighbor thinks the police went too far.

“These allegations are insane,” Joe Russo, 50, told the New York Daily News about his Harvey, a contractor. “He is a gun collector. His father was one too. He gave him the guns. It’s amazing what some people will come up with. He’s a hardworking man who has never been in trouble.”

Harvey has a court date set for May 11.

His arrest was the second in as many weeks by the NYPD in Queens, following on the heels of Ronald Drabman, a 60-year-old man who was charged by Brown’s office with over 110 weapons violations after guns and an “unprecedented” amount of ammunition were found on a search of his home in the Bayside area.