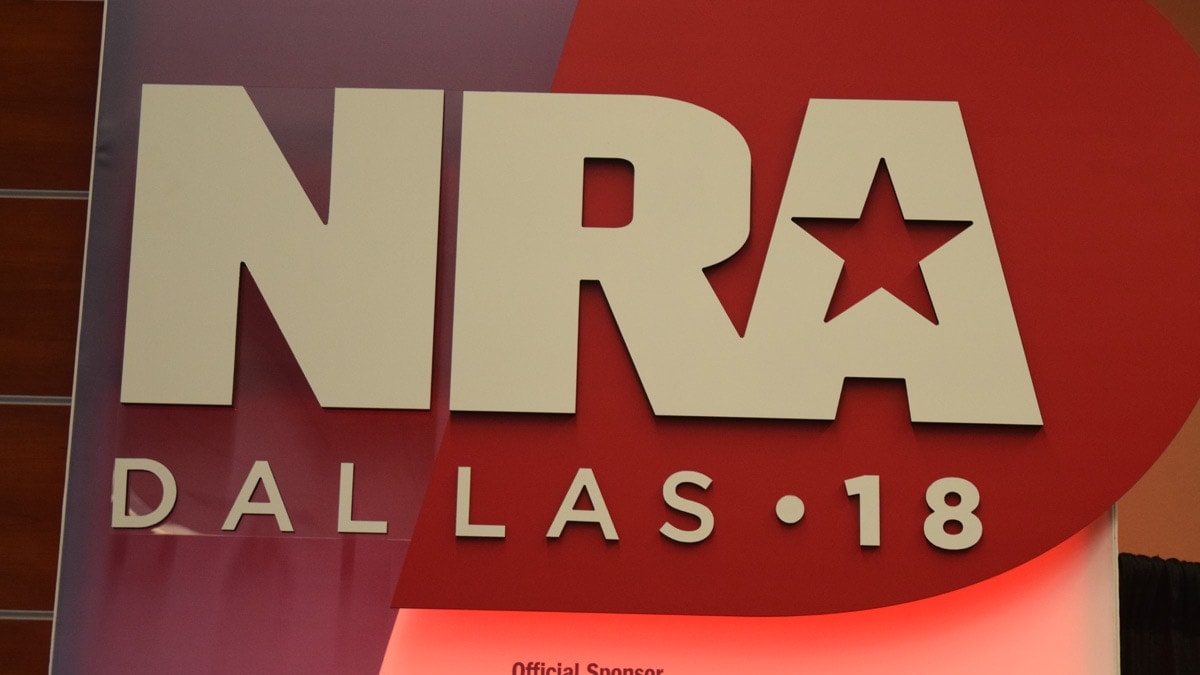 Guns.com will keep you informed with a live stream of all the speeches. Check back for updates soon.

Chris Cox, NRA’s chief lobbyist, opened the forum with a rallying cry for the association’s five million members.  “They cant beat us on the facts, but if they can shame us out of the fight, they will win,” he said of the fervent gun control movement gaining steam after the Parkland massacre. “In the face of their bitter hatred, there’s never been a more critical time for us to stand tall and, by God, to stand proud.”

Cox then handed the stage over to Stephen Willeford, the NRA member credited with interrupting a shooting at the First Baptist Church in Sutherland Springs, Texas last year.

Some 26 parishioners died and another 20 were injured when a former Airman opened fire with an AR-15 during a late morning service. Willeford, a nearby resident, heard the gunfire and rushed across the street to intervene.

“He had an AR-15, but so did I,” he told the crowd gathered at Friday’s forum. “I’m not the bravest man in the world or anything, but I was there and I could do something. And I had to do something.”

The gunman fled the scene and Willeford pursued, eventually leading police to the suspect about 10 minutes down the road from the church.

NRA leadership presented him with a lifetime membership Friday, saying Willeford embodies the association’s “force of good” in the world.

“I’m here to tell you you have two friends in the White House,” he said.  “The right of the people to keep and bear arms will not be infringed.”

Pence touted the president’s policy victories since taking office last year — boosting defense spending, funding the beginning of a border wall, protecting the balance of the Supreme Court and appointing Constitution-friendly federal judges across the nation — before promising a solution to mass shootings mindful of the Second Amendment.

‘These and too many others acts of violence shatter our families and leave our nation searching for answers,” he said. “We will continue to bring American solutions to this crisis. We will end this evil and protect our civil liberties at the same time. That’s the American way.”

He capped off his speech encouraging Cox’s rally cry, saying “Stay in the fight. Exercise all of your fundamental rights. Live out your citizenship in all the ways that make NRA one of the potent forces of good in America.”

President Trump said he was “doing the right thing” by appearing at the National Rifle Association’s annual convention in Dallas on Friday to rally the organization’s members to vote Republican in the midterm elections.

Trump’s speech waded through issues he built his campaign on — such as immigration, jobs and tax reform — but he touched on key gun issues on and off throughout the speech.

Minutes into his speech, Trump abruptly transitioned to talk about gun rights, saying “let’s talk about guns, shall we?” and argued that the consequences for cities like London, Paris and Chicago for having tough gun laws has been violence.

“It seems like if we’re going to outlaw guns like so many people want to do — Democrats … and (then) we are going to have outlaw all vans and trucks, which are the new form of terror for maniacs,” he said and added, “Let’s ban all vans, trucks cars, — let’s not sell any more cars.”

Although Republicans have control of both chambers of Congress and the White House, Trump argued they still need more. “They say we have a majority — what a majority of just one person?” he asked. “We gotta do great in 2018.”

With more Republicans, they could fill the more than 100 judge seats vacated in federal court system and other positions, such as ambassador roles. He blamed Democrats for slowing or disrupting the process.

He touched on his administration’s efforts to improve school security, an issue sparked by the killings in Parkland, Florida that left 17 people dead and 15 others injured. The incident spurred massive demonstration by students and victims that largely challenged the NRA’s influence. Initially, Trump made statements that contradicted solutions promoted by the NRA, but he abruptly abandoned those ideas after meeting with NRA officials.

Heading toward a close, Trump made reference to the battle of the Alamo, using the historic event to describe Texans’ feelings toward gun rights. “Like those early Texans, we will never surrender,” he said, adding “We will live and we will die free.” 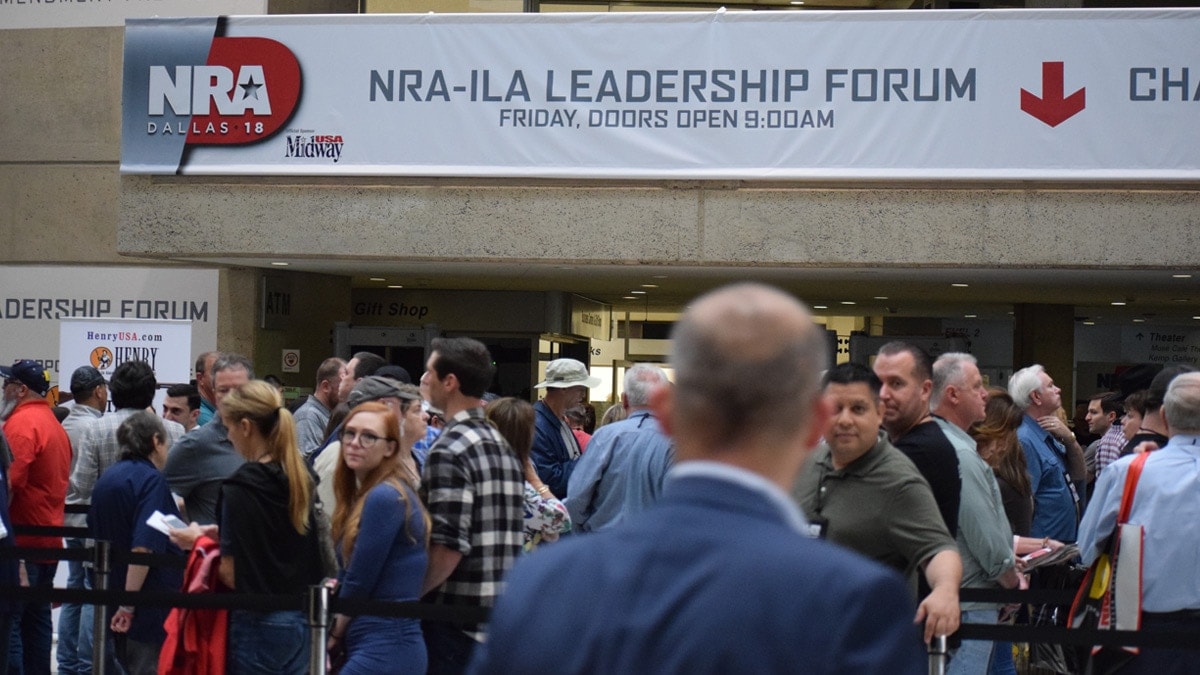 Patrons waiting to see President Trump speak at the NRA leadership forum during the organization’s annual convention in Dallas on May 4, 2018. (Photo: Daniel Terrill/Guns.com)

Wayne LaPierre serves as arguably the most visible member of NRA’s leadership team and is largely credited with advancing right-to-carry laws in more than 40 states.

He told members Friday he’s seen many attempts over the last four decades to squash the NRA, but promised the organization remains “stronger than ever” in 2018 — despite the left’s tactic of “gaslighting tragedy and exploiting victims.”

“They’re so eager to dance on NRA’s grave that they can’t recognize the undeniable truth right before their eyes,” he said. “They can’t see you — millions of good-hearted people.”

Texas Republican Gov. Greg Abbott said mass shootings stem not from guns, but from the culture itself.

“The problem is hearts without God. Homes without discipline. Communities without values,” he said. “In this country, we have a core value that our nation is founded on and that core value is our United States Constitution.”

“Even in the fog of this horrific tragedy, people in Sutherland Springs looked me in the eye and demanded I would not allow this tragedy to take their guns,” he said.

Sen. John Cornyn said he wanted to reshape the conversation about the Second Amendment by making it synonymous with public safety.

“Support for the Second Amendment and support for public safety are one in the same,” he told the crowd of NRA members filling the auditorium during the organization’s annual meeting in Dallas.

Like many other speakers, he praised Steven Willeford for stopping the gunman who murdered 26 people and 20 others at a church in Sutherland Springs, Texas in November. Cornyn challenged the narrative that such defensive gun uses are rare.

Recently, an unpublished paper by the Centers for Disease Control surfaced that addressed a study from the 1990s showing between 500,000 to 3 million DGUs a year. However, researchers have dismissed the results due to the ways in which the data was collected.

Five years ago, Sen. Ted Cruz and Sen. Chuck Grassley co-sponsored a bill alerting the Department of Justice every time a fugitive or a felon tried to buy a gun.

The Grassley-Cruz amendment, as it became,  would have strengthened the federal background check system and addressed mental health concerns in the wake of the Sandy Hook massacre, Cruz told NRA members Friday. It received a majority vote in a Democratic-held Senate, but fell apart over a filibuster.

Fast forward to Nov. 5, 2017 when a former Airman opened fire in a church in Sutherland Springs, Texas with an AR-15 his assault convictions barred him from owning.

“Had that law passed …. he would have been in federal prison instead of in that church murdering those innocent men, women and children,” Cruz said.

During an animated 30-minute speech, Cruz retold the heroics of Stephen Willeford, who interrupted the church massacre that fateful morning armed with his own AR-15. He chased the shooter in a high-speed pursuit, ultimately leading law enforcement to the suspect’s crashed car.

In the end, Cruz blamed Democrats for targeting the wrong menace and “selling lies.”