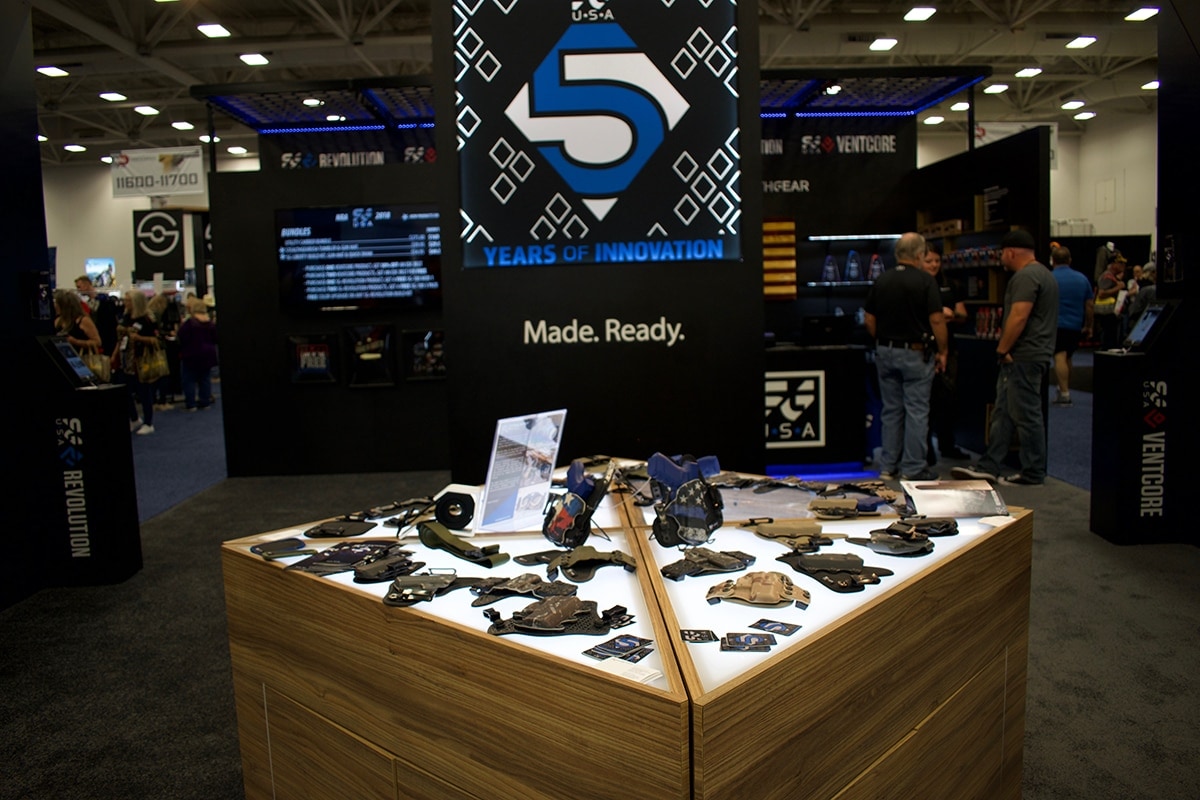 StealthGear USA is best known for its innovative holster designs, but the company isn’t looking to be pigeon-holed into just the holster game. Launching new travel accessories at the NRA Annual Meeting in Dallas, SGUSA proved its not afraid to step outside its box.

The company first rose to notoriety with their original holster design that featured a new tech the company called VentCore. VentCore paired a comfortable yet breathable backing to a rigid, molded shell. As word spread about the design, interest spread and soon the company expanded its offerings to include more designs. SGUSA said this demand, while promising, created difficulties for the company just trying to build a foundation.

“We had to escalate our equipment and labor expenses very rapidly to keep ship times under a reasonable time frame. We called it ‘trying to wrap our arms around a whirlwind,’” company directors told Guns.com in an email. “All of that in addition to our discovery that it is an industry that is subject to hyper-competition, political realities, and knock-offs and imitations – made for a challenging start.”

Despite some bumps as the company worked to get its legs on stable ground, the holster maker said the reward comes in the form of happy customers and a positive economical impact.

“The reward has come in being able to successfully create dozens of new jobs in the USA and thousands of very happy SGUSA customers,” the company said. “We love hearing from our customers online, at trade shows, and at our store in American Fork, Utah.”

Celebrating its fifth year in business at NRA-AM in Dallas surrounded by its followers and supporters, SGUSA is proud of what it’s built and the products it sells; however the war has not been worn. The company said that with only 4 percent of U.S. companies reaching a benchmark 10 years in business, SGUSA continues to strive for long-term success.

“We must continue to build upon our core principles of products that are innovative, interesting, and that make significant improvements on what currently exists in the industry,” SGUSA explained. “We believe this will lead SGUSA to a path of steady growth and strong brand awareness in the industry and in five years SGUSA will be a household name among the premium concealed carry companies in the world.”

Company directors added, “Other product lines will branch off from our firearms-related gear in areas of travel, apparel, outdoors, etc.” SGUSA’s reach into other arenas has already begun, with the company showcasing a wallet, luggage strap and passport pouch to consumers attending NRA-AM in Texas. The outreach into travel accessories had consumers stopping to ponder over SGUSA’s latest wares.

As for the future of its products, SGUSA told Guns.com that the company has several holsters in the works. The holster maker hinted at a possible ankle rig and outside-the-waistband holster down the road but said they intend to only release products that meet the company’s mold of innovative, quality offerings.

“We don’t add a product to our catalog unless it is innovative or better than what’s currently available on the market. Too many companies ‘pile on’ and just copy their competitors,” SGUSA said. “We have not yet released an ankle carrier or an OWB attachment system because current offerings have been very functional and adequate. Our version of those kinds of products will be released when they feature innovative improvements over current models.”

In the meantime, the company continues its march knowing all the while that its loyal customer base will follow it wherever it leads.

“Many try our gear for the first time and then never go anywhere else. We frequently get emails from customers who use our holsters for five or six of their carry weapons. One customer in North Carolina has over 18 of our holsters,” SGUSA said. “The best is yet to come.”