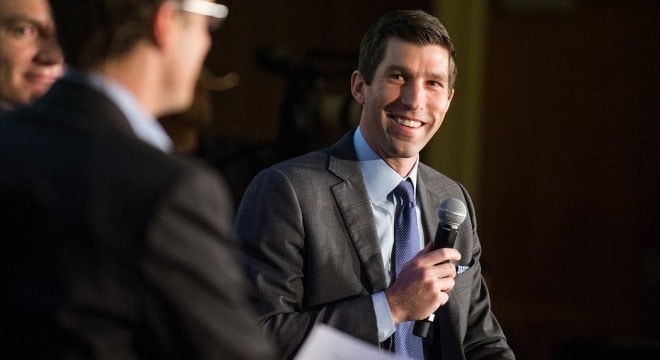 State Sen. Owen Hill was among the trio of Republicans who scuttled a bill to enshrine extreme risk protection orders under Colorado law. (Photo: Denver Institute/Twitter)

A Republican-controlled state Senate panel this week torpedoed a so-called “red flag” bill that they argued did not square with the Second Amendment.

The measure, HB 1436, would have established extreme risk protection orders under Colorado law, a move that would allow those concerned that an individual is a threat to themselves or others to petition a court to have their firearms seized. The proposal, which passed the House last week, was shot down 3-2 in a party-line vote by the Senate’s State, Veterans, and Military Affairs committee on Tuesday. Those who gave the bill a thumb’s down said it was big policy rushed through the legislature and clearly violated the Constitution.

“Anytime we are talking about taking people’s guns away we have to contend with the Second Amendment. The Second Amendment is pretty darn clear that these rights ‘shall not be infringed,'” said state Sen. Owen Hill, R-Colorado Springs, who said he had due process concerns that proposed seizure orders could start down the road to a “surveillance state.”

The proposal would allow a family, household member or law enforcement officer to ask the court for a temporary extreme risk protection order to surrender the subject’s guns and firearm permit to police or a federally licensed firearms dealer. The court must schedule a second hearing no later than seven days later to decide to continue the ERPO for up to six months or rescind it. The bill, introduced at the end of April and backed by gun control advocates, passed the House 37-23 with less than a week left in the current session.

Democrats contend the measure had protections against false reports and to return guns to those found not to be in danger or a threat. “This is not about taking away guns from now until forever,” said Sen. Lois Court D-Denver.

The measure was supported by Everytown, who argue similar bills have been approved in Florida, Vermont, and Maryland in the rush to pass new gun laws since the Feb. 14 shooting at Marjory Stoneman Douglas High School in Parkland, Florida that left 17 dead. Prior to that, only California, Oregon and Washington had enacted such laws since 2014, often in the aftermath of extensive lobbying by anti-gun groups and on narrow margins.