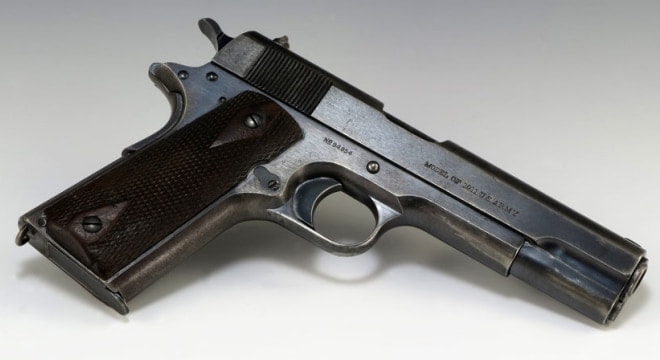 U.S. martial M1911s were in production from 1912-1945 from companies as diverse as Ithaca, Remington-UMC, Singer, and US&S. (Photo: National Archives)

The Civilian Marksmanship Program is set to offer to the public 8,000 vintage M1911 pistols transferred from the Army this year.

The 2018 National Defense Authorization Act approved by Congress last November outlines a two-year pilot program for moving some of the Army’s surplus .45ACP GI longslides to the federally chartered non-profit corporation tasked with promoting firearms safety training and rifle practice. The CMP received the first batch of guns earlier this year and has been grading and inspecting the vintage pistols. The good news is, there is a wide array of guns that will be available from rack grade models that need some TLC, to more rare pieces.

“Some of those are anticipated to be unusual and worthy of being auctioned,” said Mark Johnson, CMP’s chief operating officer on Wednesday. “The remaining number will be sold based on a computerized Random Number Generator.”

It should be noted that the grade is close to, if not under, current market prices for U.S. military 1911s. For example, the current Blue Book value of a Remington-Rand made 1911– the most common maker who cranked out more than a million such pistols in WWII– is listed as $900 in 60 percent condition.

How to purchase one

On the bright side, there are literally thousands of shooting and collecting clubs as well as Veterans organizations such as the VFW that are affiliated with the CMP and showing marksmanship or firearms knowledge in most cases is as easy as sending in a copy of a concealed carry permit, military service records or proof of participation in a shooting competition. Further, those seeking a pistol have to obtain a NICS check prior to purchase to ensure they are not a prohibited firearms possessor.

“The CMP, Congress, and the United States Army do not want the 1911 to have to be returned to CMP 1911 if the purchaser is not legal to possess,” said the group, explaining the pre-check. “The more time the pistol is in transit, the more likely it is that it could be lost or stolen.”

Every applicant for a 1911 will be treated as a new customer to CMP, which means those wanting one of these surplus pistols has to go through the process from scratch even if they have bought M1s or other rifles from the organization in the past. Pistols must be sent to an FFL, where a second NICS check will be performed before transfer.

The CMP will post a 1911 order form packet on their website on June 4 for download and will only accept one packet per customer to make sure 8,000 would-be buyers can get in on the deal rather than see a few collectors snatch up all of the guns. A 30-day window from Sept. 4 to Oct. 4 will be open to mail the packet to the organization’s Anniston, Alabama address. The day after the window closes, all of the qualifying names will be fed into a Random Number Generator and CMP staffers will start making calls. Applicants who get a call will be offered a choice from the grades that are available and will have five days to make payment if they choose a handgun.