If you are a fan of Russian military equipment, we have a parade for you (VIDEO)

You can see a little bit of everything in the latest Russian military parade from Moscow — even Steven Seagal.

Tsar Vlad has certainly kept the magic alive in Red Square as seen in the above 70~ minute long May Day Parade from yesterday shown on Russian state TV.

The opening is good, especially the inner workings of the Spasskaya Tower’s big clock. Then cue the Kremlin Regiment (in rebooted Tsarist uniforms marching with spotless SKS rifles complete with blonde wood stocks) and Defense Minister Sergey Shoygu propped on an immaculate Lada open-topped limo that looks like it came from Brezhnev’s motor pool.

You can skip Putin’s speech from about the 13- to 23-minute mark and pick up with the Gosudarstvenny Gimn Rossiyskoy Federatsii played by the assembled Army bands complete with artillery percussion by a saluting battery of 122mm guns and the march is on.

Various ground units file past from all branches of the Russki military and, in an increasing departure from the old Cold War days of drab uniforms and helmets, more are wearing traditional 19th century Imperial Army style uniforms complete with St. George ribbons and cockades that include old monarchist Romanov elements. Out with the Commies, in with the Cossacks if you will.

Hardware on display in the hands of the beaming frontoviks include now downright vintage wood stocked AK-74s, polymer-stocked AK-74Ms, and, here and there, the new series AK-12 rifles. At the 39-minute mark, special operations troops in their distinctive telnyashka striped t-shirts are carrying suppressed 9x39mm VSS rifles and almost comically large load bearing vests that are sure to have all the airsofters swooning. A few seconds later are AKs swagged out with red dots and GP-34 30mm grenade launchers — Moscow’s version of the M203 bloop tube. You can bet some of these grinning little green men have been vacationing in the Donbass and Syria lately.

At about the 47-minute mark comes the heavy stuff, lead by a WWII-era T-34 tank, the backbone of the Red Army during the war, flanked by machine-gun-armed ATV outriders and posting a giant Hammer and Sickle flag, officially retired by Russia in 1991. Then comes a NATO recognition book worth of Russian armor ranging from the new T-14 Armata main battle tank and more pedestrian T-72s to a big 2S35 Koalitsiya-SV 152mm self-propelled howitzer. Drones on flatbeds, armored personnel carriers and the Russian version of the MRAP tag along sandwiched by engineering and air defense vehicles, S-400 missiles and tactical rocket systems.

Here is the Russian cheat sheet for the vehicles: 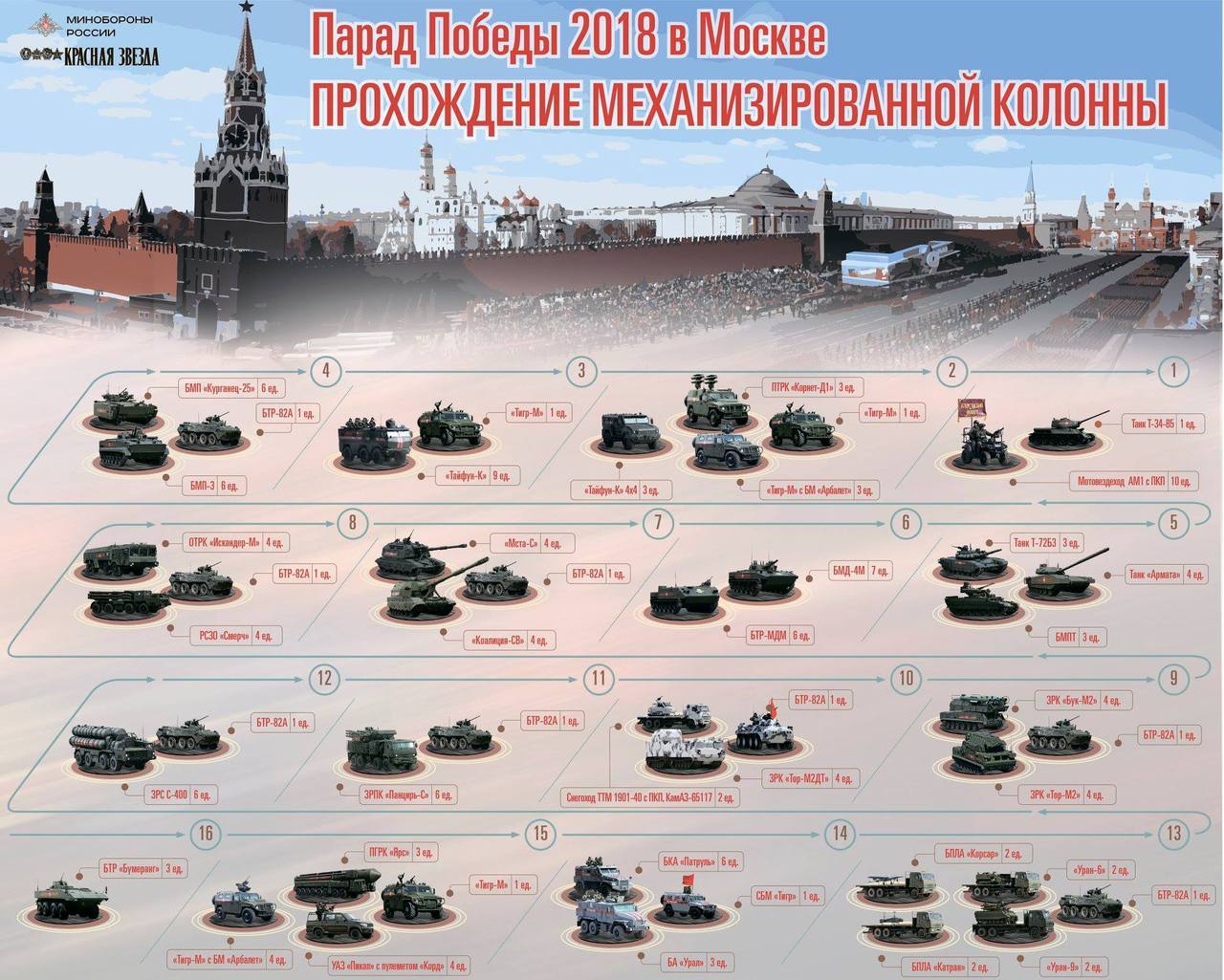 Then comes the air support at the 59-minute mark, lead by some big Red Dawn-looking Mi-24 Hinds (Wolverines!) and Ka-52 Alligator gunships coming in low over the Kremlin. Tom Clancy fans will dig on the Tu-22M3 Backfire and Tu-160 Blackjack strategic bombers followed by a mix of tactical aircraft including Su-34s, Su-24s, MiG-31s, and Mig-29s. Three lumbering Tu-95MC Bear bombers with their distinctive contra-rotating propellers make an appearance as does an acrobatic team of six camouflaged Su-25 Frogfoot strike aircraft, Russia’s equivalent of the A-10. 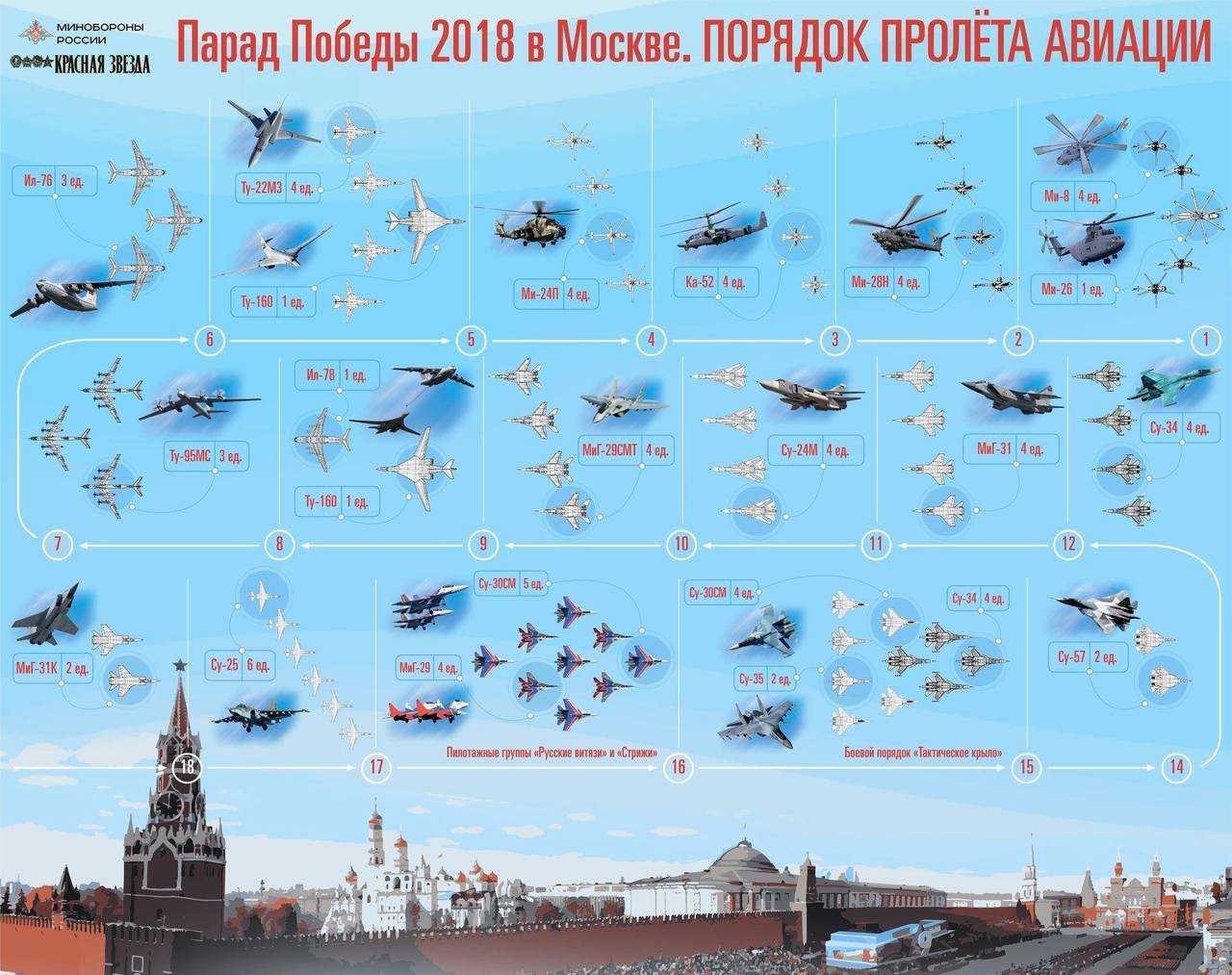 The program ends with a combined drill team getting their SKS and Prussian style goose-step on as the band takes it home.

Also, Steven Seagal makes an appearance in the crowd at about the 1 hour 7 minute mark. This Steven Seagal, not those Steve’n’Seagulls.