Oklahoma: Groups on both sides urge Fallin to act on constitutional carry bill 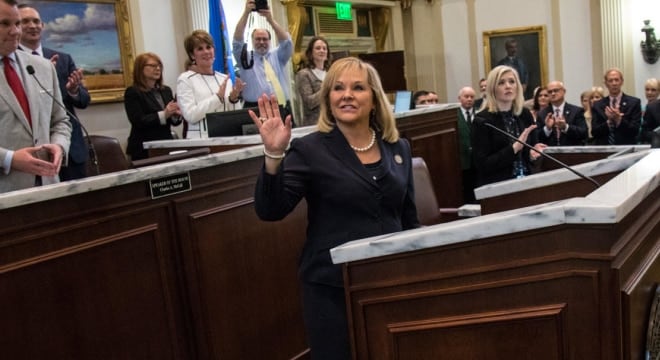 Calls for Gov. Mary Fallin to make a decision on a bill allowing concealed carry without a permit in Oklahoma are ramping up as the window for her to act is closing.

The popular measure, SB 1212, was approved last week by lawmakers and sent to the Republican governor who has to act on the proposal within 15 days. The bill keeps the state’s current concealed carry licensing scheme but codifies that a permit is not required for a law-abiding Oklahoma resident to carry a concealed handgun. The plan’s author argues the state already recognizes the gun rights of visitors to the Sooner State from any of a dozen where constitutional carry is already the law of the land.

“So if somebody from Arizona or Missouri or one of these other states comes here to visit us in the state Oklahoma they can actually carry without a permit — which is a right we afford to them that we do not entrust to the citizens of the state of Oklahoma,” said state Sen. Nathan Dahm, R-Broken Arrow.

National gun control groups are funding full-page print ads and a virtual homepage takeover of The Oklahoman, the state’s largest daily newspaper, urging Fallin to veto the bill. The group using talking points from the Oklahoma State Police, hold that the move is dangerous.

“This bill puts public safety at risk by making it easy for people with dangerous histories to be armed in public,” said Christine Jackson with Moms Demand Action. “Our legislature has shown it is willing to jeopardize our safety and bow to the demands of the gun lobby.”

While the group’s state affiliate has heartburn over the bill’s deletion of the training requirement to carry a concealed weapon, the National Rifle Association supports SB 1212 saying it is in line with the Second Amendment and is urging members to reach out and contact Fallin, asking for her approval.

“Self-defense situations are difficult, if not impossible, to anticipate,” said the NRA’s lobbying arm in an alert. “Accordingly, a law-abiding adult’s right to defend himself or herself in such situations should not be conditioned by government-mandated time delays and taxes.”

The measure passed the state House 59-28 last month before rolling through the Senate last week 33-9, margins that are strong but not quite veto-proof. Notably, Fallin’s first veto override took place in 2014 on a gun bill she rejected only to have lawmakers trump her just 10 days later. Earlier this week she signed a “stand your ground” use of force expansion to cover churches.