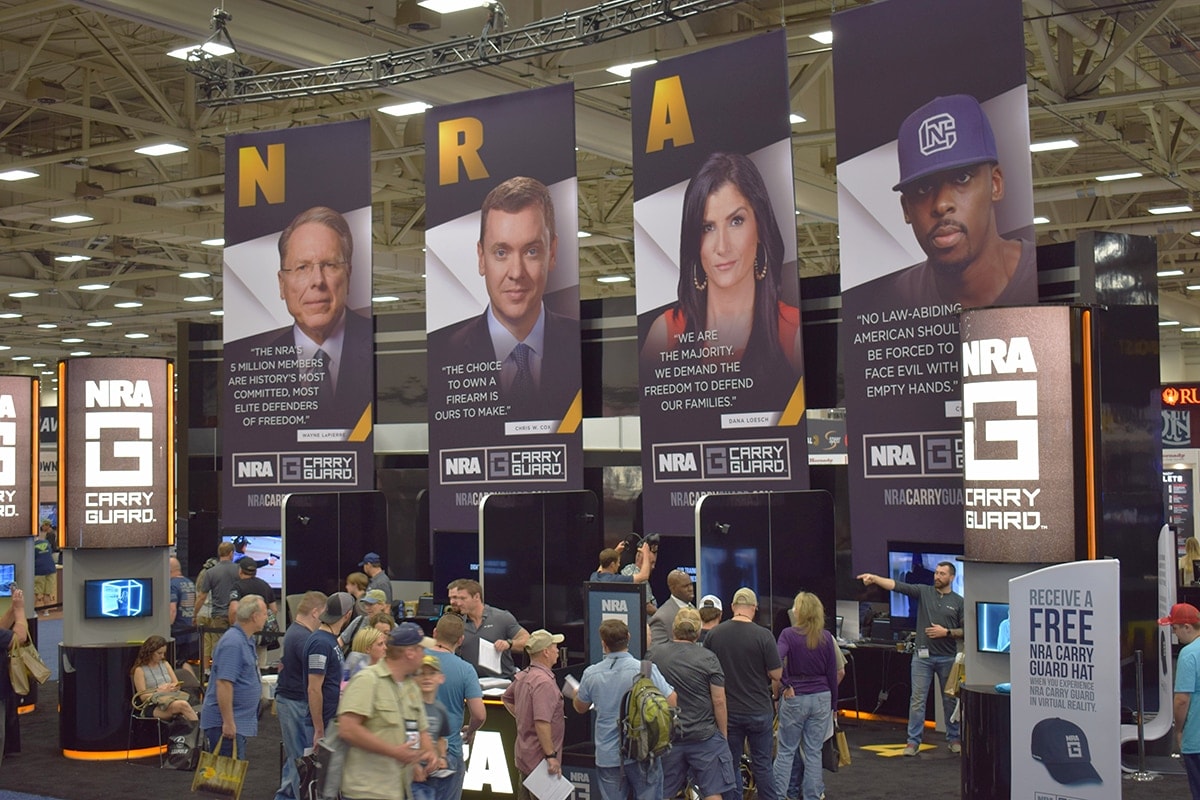 Men and women mill about the National Rifle Association’s booth under the eye of its most prominent female commentator, Dana Loesch. (Photo: Jacki Billings)

As I ambled around the NRA Annual’s Meeting, held May 4-6 in Dallas, the amount of women both on the show floor and in booths caught my eye.

While women have always been welcome at NRA-AM, this year they weren’t simply spectators. Lining booths, it seemed as if more vendors featured women representatives espousing their products benefits. Advertisements set along the paths for various companies now showed women wielding gun wares, not just men.

It seems the tides are turning in the gun industry and women are stepping out of the shadows and into the limelight. As I weaved my way through a long line at Sig Sauer’s booth of fans looking to snatch an autograph from competition shooter Lena Miculek — a line that was as long as her father Jerry Miculek’s — it seemed evident that women are no longer complacent to just exist in the industry. They are taking a prominent position and role in the house of firearms.

“It’s been busy,” said a representative at Can Can Concealment. “We’ve seen a steady flux of interest from women.” Can Can Concealment is one of a handful of holster companies birthed to provide holsters designed for women. Though the company has branched out since its inception — with employees showing us their Sport Belt holster for men — the mission of the company is firmly rooted in providing holsters to women. 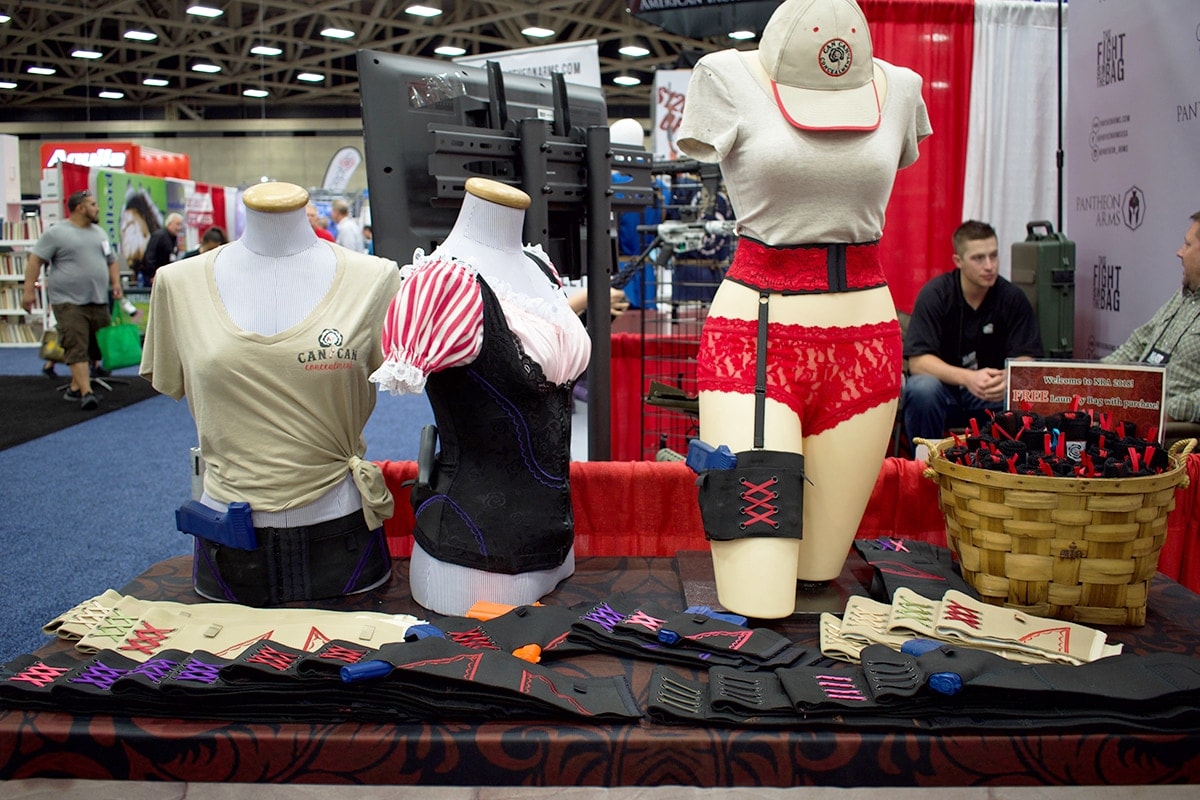 Can Can Concealment showed off a colorful booth of women focused holster products. (Photo: Jacki Billings)

At the show, their booth, like many other female-centric options, was inundated with female gun owners looking for creative ways to tote their pistols. Can Can Concealment said as I strolled by late Sunday afternoon that there seemed to be more women invested in the idea of carrying with a Can Can holster than previous years.

The most recent data provided by the National Shooting Sports Foundation suggests that women have been steadily growing in numbers in the past few years. Touted as “the fastest growing segment” of the industry, the female market has been one many manufacturers have looked to sink their hooks into. Starting off by offering pink and bling in a vain attempt to garner women’s affections, it seems as if the industry finally understands that representation matters as much if not more than glittery guns.

As I paused to take in the atmosphere of the show on its last day, I noticed that female gun owners flocked towards female reps situated at Sig Sauer, Kimber and Springfield Armory. As if looking for an ally in the sea of men, these female reps became beacons of light for female consumers. 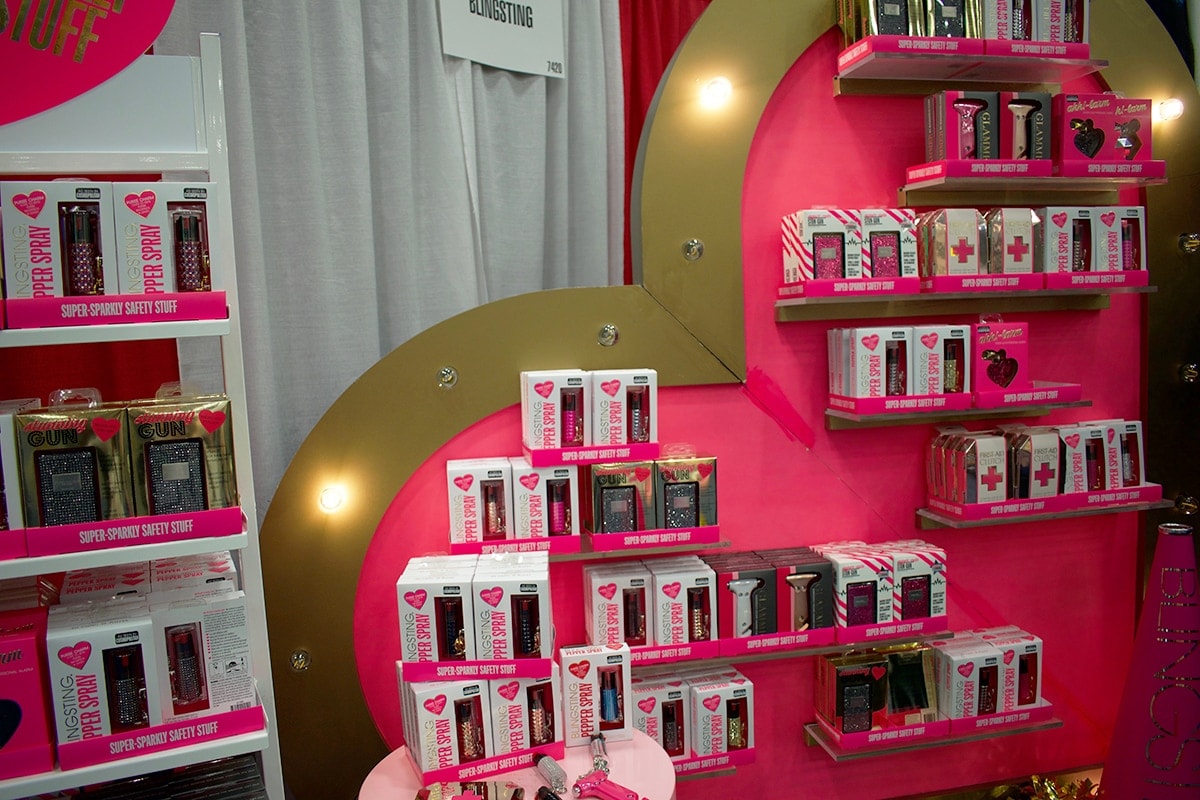 Though some manufacturers opted for the “pink it and shrink it” model to attract female consumers, many have turned away from this business model. (Photo: Jacki Billings)

At Manticore Arms Kristen Jonsson was at the forefront of the parts maker’s booth. Greeting loyal customers and potential new customers with a burst of energy and enthusiasm she became the face of the company, welcoming men and women gun owners with her infectious smile. Women, who seemed curious of the company’s products, stopped by to talk to Jonsson who cheerfully filled them in. Next door, Pantheon Arms showcased their Dolos design with a female rep who repeatedly assembled and disassembled the rifle system.

Outside the show floor, the NRA itself aimed to include more women in its seminars. Nestled between “Sniping in World War II” and “Sheepdogs! The Bulletproof Mind for the Armed Citizen” was “Women and the Gun Buying Experience.” According to the NRA’s summary of the event, the class was designed to help arm women with the information on how to buy guns.

“Were you turned off by your last gun-buying experience? Patronized or ignored? Were you talked into a handgun you dislike — and now it sits idle in your nightstand? This mother/daughter team — gun store owners — will arm you with the valuable information and questions you need to ask so you can walk out having purchased the right gun,” the description from the NRA said. 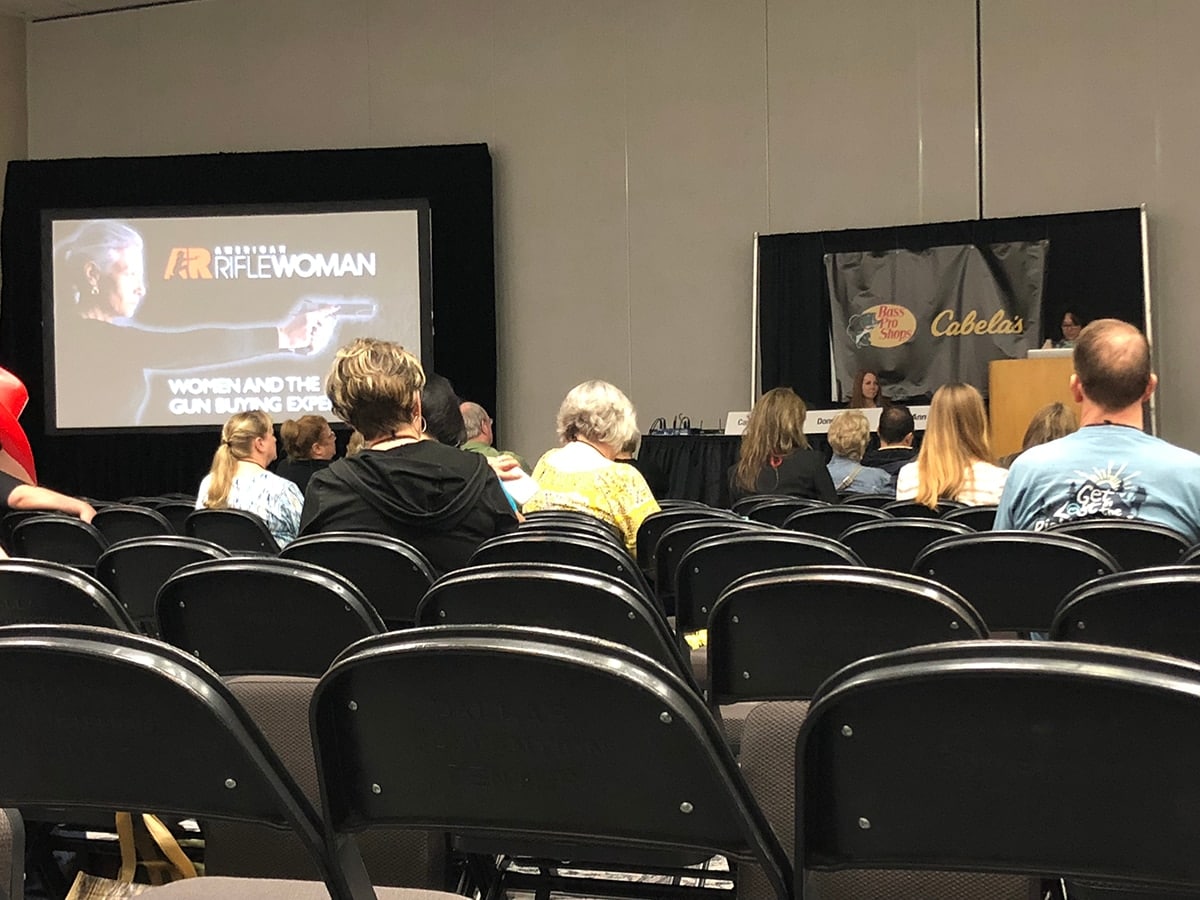 The “Women and the Gun Buying Experience” seminar was created to discuss the challenges and questions women have when purchasing firearms. The class was open to both men and women, but closed to press. (Photo: Jacki Billings)

An interesting addition to the course load, I headed to the basement of the Kay Bailey Hutchison Convention Center in Dallas to get the scoop. Unfortunately, I didn’t make it far. Though the seminar’s summary clearly stated that the class welcomed “anyone who wants to learn about women and firearms” that description apparently did not extend to members of the press. After a few minutes of sitting in on the seminar, and just when it was getting good, I was approached by a NRA rep and informed that I was not welcome.

After a disappointing and abrupt end to the women’s seminar, I trudged back up to the NRA-AM floor. Standing on a stairwell overlooking the show floor I took a beat to watch the teeming crowds push their way into Daniel Defense for a rifle drawing. Searching the faces of excited gun owners, I took note of the women. Excitedly clutching their entries and hoping their winning number would be called, women stole the show at NRA-AM. A theme, I expect, will continue into future shows.