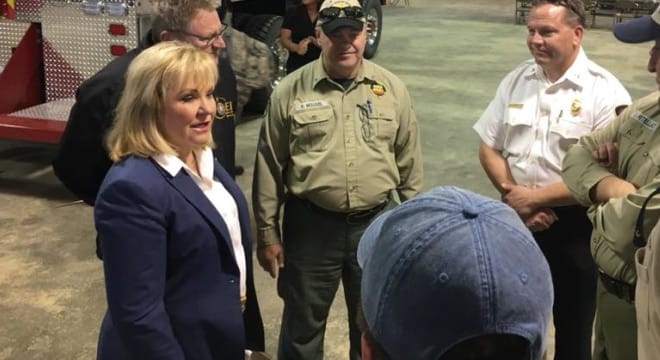 Gov. Mary Fallin dropped veto ink on a permitless carry measure on her desk last week, saying it was dangerous to police and others (Photo: Fallin’s office)

Rejecting a popular permitless carry measure on Friday, Gov. Mary Fallin said the current mandate to obtain a license to carry a concealed firearm in the state was “reasonable.”

Fallin, a Republican who ran for office on a strong pro-gun platform in part, vetoed SB 1212 which would have allowed Oklahoma residents to carry a concealed handgun without first having to pass a training course and obtain a permit. She argued in a statement to lawmakers that the move was done out of a concern for public safety.

“I believe the firearms requirement we current have in state law are few and reasonable,” said Fallin. “Senate Bill 1212 eliminates the training requirements for persons carrying a firearm in Oklahoma. It reduces the level of the background check necessary to carry a gun.”

Fallin went on to describe the state’s current gun laws regarding concealed carry as “effective, appropriate and minimal,” pointing out that she has signed multiple carry laws into effect since taking office in 2011 after leaving Congress.

It was the very question of her term in office that drew commentary from the National Rifle Association, who had urged Fallin to approve the measure and directed members to contact her on the matter.

“Gov. Fallin vetoed this important piece of self-defense legislation despite the state legislature’s overwhelming approval of the bill and her commitment to NRA members to support constitutional carry when she ran for reelection,” noted Chris Cox, executive director of the NRA’s lobbying arm, in a statement. “Make no mistake, this temporary setback will be rectified when Oklahoma residents elect a new, and genuinely pro-Second Amendment governor.”

Fallin’s social media page over the weekend took a hit with over 1,500 comments, overwhelmingly negative, posted on the link to her veto statement on the constitutional carry proposal. An unlikely ally of the governor’s, the Oklahoma Rifle Association, the NRA’s official state affiliate, broke with the parent organization and opposed SB 1212, a move that also resulted in the group’s social media accounts getting scorched by upset Second Amendment advocates.

The measure passed the state House 59-28 last month before rolling through the Senate last week 33-9, margins that are strong but not quite veto-proof. The sponsor of the bill, state Sen. Nathan Dahm, R-Broken Arrow, argued the “requirements are a burden to the poor and elderly who should be afforded the right to defend themselves without having to pay the government to do so.” Dahm said he was disappointed but not surprised at Fallin’s action, describing the governor as a “campaign conservative.”

Term-limited, Fallin is not one of the crowded field of candidates standing for this year’s gubernatorial election in the state. At least 10 Republicans including state auditor Gary Jones and Lt. Gov. Todd Lamb are heading into a primary election next month, with many in the race publicly supporting SB 1212.