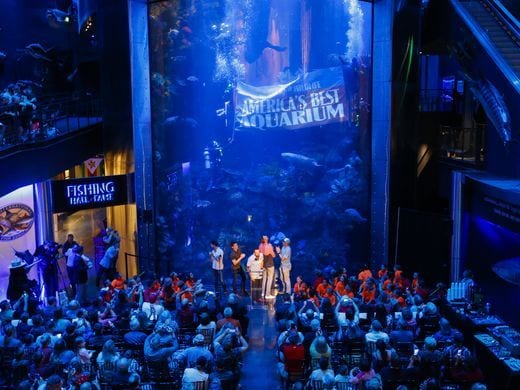 The Wonders of Wildlife National Museum and Aquarium opened in September after Morris spent more than a decade planning the 350,000-square-foot facility near Bass Pro Shops headquarters in Springfield, Missouri. The facility — featuring 4-D interactive trails and exhibits with 35,000 species of fish, mammals, reptiles and birds — won USA Today’s best new attraction in 2017.

“What a happy, happy, happy day,” Morris said of the win, announced May 4. “It was a team effort to build this place.”

The museum’s “Aquarium Adventure” introduces guests to more than 800 species living in and among the globe’s water habitats, including sharks, rays, jellyfish, eels, eagles, otters and giant game fish “that belong on every angler’s bucket list.”

“They put a lot of hard work getting it done,” he said. “Johnny’s always got a new vision for improving things. I think it deserves this award, yes, absolutely.”

Wonders of Wildlife faced off against 19 other nominees, including the National Aquarium in Baltimore, the Florida Aquarium in Tampa and the Seattle Aquarium in Washington. The top 10 winners include: