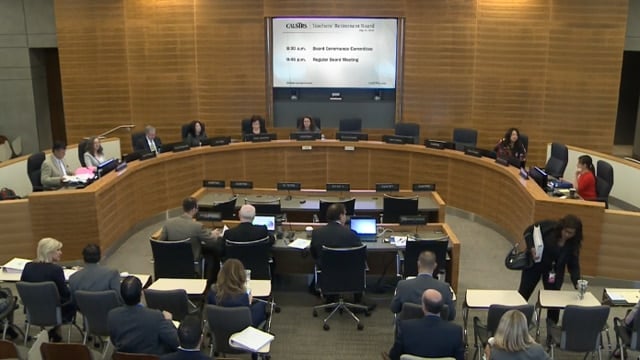 The nation’s second largest pension fund will reconsider its relationship with wholesalers and retailers of modern sporting rifles.

“As trusted fiduciaries for California’s … educators, the Teachers’ Retirement Board is dedicated to securing our members’ financial future during their retirement years,” said Harry Keiley, Chair of CalSTRS Investment Committee. “We’re taking steps to protect the CalSTRS portfolio, avoid reputational risk and increase the long-term value of the companies in which we invest, while also expressing sensitivity and empathy for the heinous gun-related tragedies that have impacted our country over the last several years.”

The pension fund manages over $225.5 billion and serves just under 1 million public school educators in California. It describes itself as one of the most vocal on issues of gun violence, voluntarily divesting from Smith & Wesson and Sturm, Ruger and Co. in the months after the Sandy Hook massacre.

Now, the system will hire two new staff for a combined $280,000 annually to engage with companies selling guns and bump stocks deemed illegal in California. If the efforts fail — though the board’s plan doesn’t specify exactly how — the system will consider severing ties completely.

State Treasurer John Chiang urged the board to divest now — just as he did back in October, a week after the Vegas shooting left 58 people dead and some 850 others injured. “It would be recklessly inconsistent for anyone who supports California’s assault weapons ban to believe that investing in companies making or selling these weapons or ancillary devices ensures teachers’ retirement security,” he said.

Many of the retailers within the system’s portfolio voluntarily implemented age restrictions on gun sales after the Parkland massacre. Only two companies, Sportsman’s Warehouse and Academy Ltd., still stock “assault rifles” and none offer bump stocks, according to the board’s plan.

“Unlike other CalSTRS engagements, where staff generally prefers a quiet engagement approach, this engagement may be more effective with a customized public engagement strategy,” the plan says. “To date, the element of social pressure has proven far more effective, as evidenced by the companies’ responses to the social attention.”

Not everyone agrees with cutting ties, however. Christopher Ailman, CalSTRS chief investment officer, told Bloomberg earlier this month “divestment hasn’t made the world a better place.”

“If we divest, we don’t have a place at the table and we don’t change behavior,” said Vicki Fuller, CIO of the New York fund. “We do need our companies to be thinking long term about how they are going to be able to continue to generate their earnings.”