Illinois Senate passes 2 gun control bills, including one that has been vetoed twice 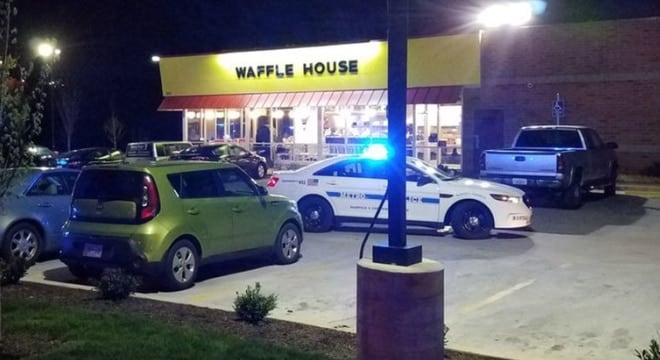 A shooting at a Tennessee Waffle House has translated to an Illinois Senate bill on gun transfers (Photo: Nashville Police Department)

The so-called “Waffle House” law and a resurrected gun dealer licensing act were approved Wednesday by lawmakers in the Land of Lincoln.

The proposal associated with the breakfast joint, SB 2387, would make it a felony to transfer a gun in Illinois to someone without checking to see if they had a valid Firearms Owners Identification card. The bill passed 42-10 and came about after the case of 29-year-old Travis Reinking, who shot six people at a Nashville area Waffle House in April. Reinking had been an Illinois resident and police had confiscated both his FOID card and guns after a run-in with the Secret Service in 2016, but his father had later returned his firearms.

“While we, unfortunately, cannot take back what happened, we can ensure our laws are modeled to prevent this from ever happening again,” said state Sen. Julie Morrison, D-Deerfield, the bill’s sponsor.

Those transferring a firearm would have to fill out an affidavit acknowledging the state law and turn it over to the state police and area prosecutors. Violators could face a year in prison.

The second measure, SB 337, a fresh attempt to add another layer of government oversight to already regulated federal firearms licensees, passed the chamber 35-18, picking up more votes than a similar bill’s 30-21 performance last year, including a few Republicans who crossed the aisle to support what they term as a compromise measure built to win Gov. Bruce Rauner’s signature.

“We have refocused the gun dealer safety legislation to address our most important priorities—requiring gun dealers to follow common-sense safety practices and cracking down on businesses that are enabling or engaging in gun trafficking, said state Sen. Chris Nybo, R-Elmhurst, who signed on to the new bill. “And we have done so without creating too much of a burden for local businesses.”

If signed into law in its current form, state police would issue certifications to gun shops on a sliding fee, and dealers would have to meet a series of new requirements including annual staff training, instituting a gun storage plan and allowing inspections by local law enforcement.

Although national big name gun control groups including Giffords and Mom’s Demand Action quickly celebrated the win, Second Amendment groups pointed out that the measure is just more of the same controversial legislation, and in some ways is even worse than the two previous proposals that have failed to make it into law.

“This newest version increases fees from a $1,000 per license to $1,500 per license with a retail location,” said the Federal Firearms Licensees of Illinois, a group of gun dealers in northern Illinois. “This bill continues the efforts by gun control advocates to shutter local small business with expensive mandates that only the largest of retailers can comply with or afford.”

The group contends the measure is also filled with vague terms and new rule-making authority for the state police that could be interpreted in ways lawmakers never intended. “For example, the State Police could determine that it is not ‘responsible business practice’ to sell AR-15s, magazines over 10 rounds or more than one gun per month to an individual,” the organization argued.

Both measures head to the House for further consideration. However, lawmakers would need to move fast as the current legislative session is set to wrap up by the end of the month.