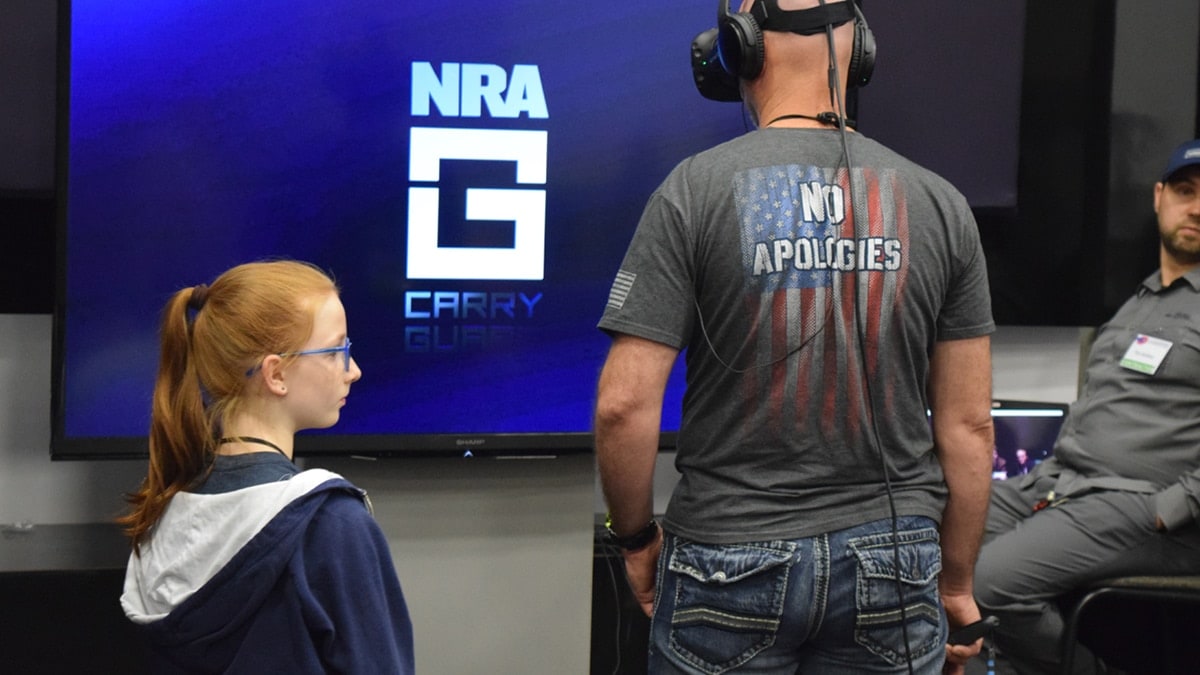 A man with “no apologies” prepares to enter Carry Guard’s virtual simulator as his daughter watches during the NRA show in Dallas on May 4, 2018. (Photo: Daniel Terrill/Guns.com)

The lawsuits stem from the New York Department of Financial Services announcing deals with insurance broker Lockton Affinity and underwriter Chubb Ltd. The companies agreed to pay million-dollar fines and signed consent decrees saying they would no longer service Carry Guard or similar policies in the Empire State. While the lawsuits acknowledge wrongdoing by the companies, the NRA describes the state’s enforcement efforts as politically motivated.

The case against New York

In a New York federal court, the NRA filed a 33-page complaint accusing New York Gov. Andrew Cuomo and DFS superintendent Maria Vullo of conspiring “to initiate an investigation into Carry Guard in an attempt to collaterally attack the NRA and stifle its gun-rights advocacy.” The lawsuit argues Cuomo attacked the NRA because it had been a vocal critic and opponent of his gun control policies. The lawsuit alleges DFS’s investigation targeted no other self-defense insurance except for the NRA’s Carry Guard policies.

The conspiracy deepens as the lawsuit alleges the DFS investigation was orchestrated by Everytown, a national group that allies itself with Cuomo and other politicians who support gun control. Cuomo has been credited for pushing through some of the strictest gun control policies in recent history, which gun rights groups have repeatedly challenged. The lawsuit says Everytown instigated the investigation by sharing its own investigatory findings about Carry Guard with New York regulators. “Notably, Everytown’s explicit political mission is to oppose the NRA,” the lawsuit says.

To support the conspiracy, the lawsuit argues that DFS’s agreements with Lockton and Chubb only prohibit them from administering policies for the NRA but no other advocacy-driven organization. “The only plausible explanation for the DFS’s complete exclusion of NRA-endorsed policies, even those ‘in compliance with the Insurance Law,’ is that Defendants seek to misuse DFS’s power to deprive the NRA of insurance and financial services, on the sole ground that Defendants disapprove of the NRA’s viewpoint regarding gun control,” the lawsuit says.

The lawsuit calls the state’s effort a “blacklisting campaign” designed to damage the NRA and its members. The NRA claims the state violated its first and fourteenth amendment rights and asks the court for punitive damages.

The case against Lockton

In a Virginia federal court, the NRA filed a 29-page complaint accusing Kansas City-based Lockton of breach of contract. The lawsuit argues Lockton failed to fulfill its obligations to “create, implement, and administer” NRA-branded insurance programs and that failure resulted in the NRA losing business in New York.

The lawsuits explains Lockton — an insurance group raking in some $1.4 billion in annual revenue — undermined a contract with the NRA by failing to comply with New York state insurance laws, something the DFS investigation uncovered. In turn, the company agreed to pay a $7 million fine and to no longer offer NRA-branded insurance. The latter effectively ended a 17-year relationship with the gun rights group. Instead of honoring “fiduciary obligations and longstanding business relationship with the NRA,” Lockton caved in the face of “politically motivated coercion” by the conspirators, the lawsuit says.

The lawsuit argues Everytown changed the political landscape surrounding the issue of guns, which explains how the organization “conceived and openly orchestrated regulatory inquiries concerning NRA-endorsed insurance products marketed and administered by Lockton.” And, amid the investigation, Lockton kept the NRA in the dark about any possible issue, the lawsuit says.

Then, without notice, “Lockton entered into a consent order with DFS that propagated misleading accusations – ascribing, to the NRA, conduct in which Lockton either engaged or approved – and adopted a host of prospective restrictions on the sale of unambiguously-lawful insurance policies to NRA members,” the lawsuit says.

“Simply put, Lockton ceased to protect the NRA and its interests. Instead, Lockton chose to abet the DFS blacklisting campaign in order to save itself,” the lawsuit adds. With the lawsuit, the NRA is seeking to recover tens of millions of dollars in damages from Lockton.

Besides losing business opportunities in the state of New York, the NRA says it has suffered reputational harm as a result of the investigation. Even though the state only punished Lockton and Chubb, which agreed to pay a $1.3 million fine and similar restrictions as Lockton, many thought charges of wrongdoing also applied to the NRA. Because of the state’s regulatory activity, insurance market Lloyd’s of London deemed NRA-branded insurance a risk and directed underwriters to end and withdraw from such policies.

The NRA continues to offer Carry Guard insurance, but details about its future are unclear. Both Lockton and Chubb announced ending relations with the NRA following February’s school shooting in Parkland, Florida. Chubb explained it had cut ties three months prior to the shooting. However, the NRA continues to list Lockton as the administrator for Carry Guard insurance on the program’s website.

The NRA introduced the self-defense insurance program last year during its annual convention. Promotional materials describe the policies as covering policyholders who are charged with a crime in cases of self-defense shootings.

Political opponents characterized the program as “murder insurance,” and New York officials publicly launched their investigation into it as advocacy efforts to oppose the program ramped up in October 2017.

Lockton and Chubb publicly cut ties to the NRA alongside some two dozen other brands in February as students and victims of the Parkland shooting protested NRA policies and pressured corporate America to act. The NRA responded by saying it was unmoved by the loss.

In a press release introducing the lawsuit against New York, the NRA maintained the defiant tone, saying it “continues to educate the public about the Second Amendment, defend the NRA and its members against political and media attacks, and galvanize participation in the political process.”

Cuomo — who called the lawsuit “futile and desperate” — responded with a similar combative tone. “In New York, we won’t be intimidated by frivolous court actions from a group of lobbyists bent on chipping away at common sense gun safety laws that many responsible gun owners actually support. We have an obligation to protect New Yorkers, and this sham suit will do nothing to stop that,” he said in a statement.