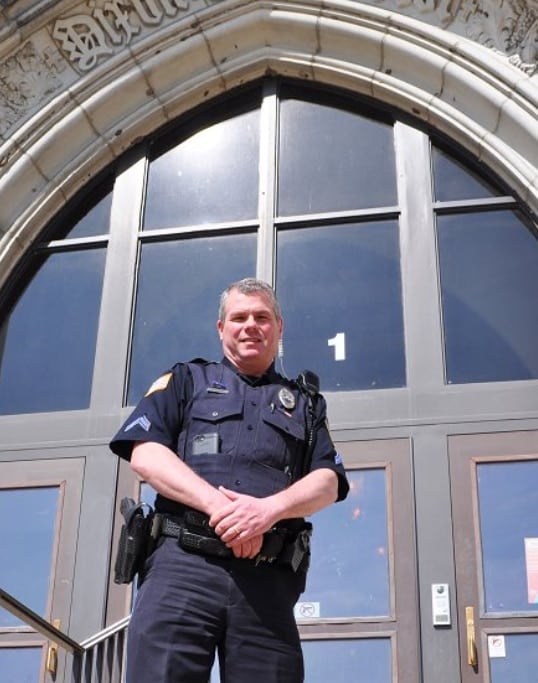 School Resource Officer Mark Dallas is credited with saving countless lives after taking down a school shooter on May 16, 2018 in Dixon, Illinois. (Photo: Dixon Police Department)

Police Chief Steve Howell said Officer Mark Dallas confronted a gunman just after 8 a.m. inside Dixon High School, located about 100 miles west of Chicago. The suspect, a 19-year-old former student, fled on foot, shooting at Dallas as he followed behind. The officer returned fire, striking the gunman and sending him to the hospital with non-lethal injuries. He remains under 24-hour supervision, according to a police statement.

“I could not be more proud of the police officer and the way he responded to the situation,” Howell said. “With shots ringing through the hallways of the school, he charged toward the suspect and confronted him head on. Because of his heroic actions, countless lives were saved. We are forever indebted to him for his service and his bravery.”

Law enforcement said no one else sustained any injuries when the unidentified shooter opened fire during a graduation rehearsal inside the school’s gymnasium.

“A lot of things went right today when a great many of them could have gone wrong,” Dixon Mayor Liandro Arellano Jr. said. “Things could have gone much worse. We are deeply indebted to our officer and the actions he took today.”

Dallas, a 15-year veteran of the Dixon Police Department, began serving as a school resource officer in 2013. His career in law enforcement spans more than two decades. He requested privacy and will reject media requests until completing an interview with the Illinois State Police.