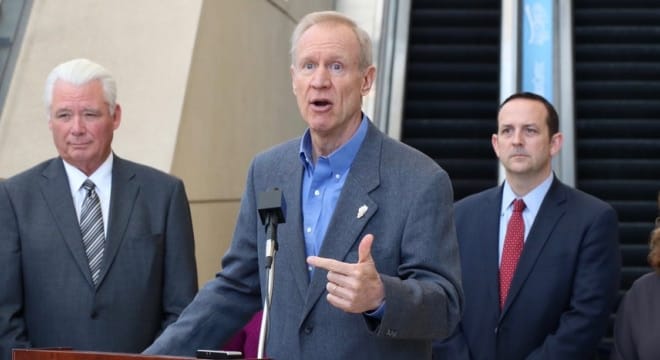 Rauner made clear this week he is not a fan of a gun dealer licensing measure now tracking in the General Assembly (Photo: Ill Governor’s Office)

Illinois Gov. Bruce Rauner said he’s not impressed with a bill he argued was crafted “more for headlines” than for public safety.

In an interview with a WJPF radio show Thursday, Rauner criticized a proposal for state-level regulation of licensed gun dealers that passed the Senate this week. The bill, which is similar to one he vetoed in March, is hyped by supporters as a vehicle to curb illegal gun trafficking, which the Republican governor scoffed at.

“This is the sort of legislation that comes out of the General Assembly under [Illinois House Speaker Mike] Madigan’s Democrats that really just creates hassles for businesses and honest business owners– just red tape, filings and fees and regulations,” Rauner said. “And it really does not improve public safety.”

The bill Rauner vetoed would have mandated a $1,000 five-year state permitting process for federal firearms licensees. In addition, it would require background checks and training for gun shop employees as well as videotaping of the businesses’ “critical areas” such as where guns are sold and stored. Exemptions to the requirements for big box retailers such as Walmart drew criticism that the bill unfairly targeted small FFLs.

Now crafted as a more watered down proposal that shifts responsibility to the State Police for gun dealer certification and eliminates the big box carve-out but hikes the fee schedule to as high as $1,500, it has attracted a veneer of bipartisanship as some Republicans have endorsed it.

Instead, Rauner pointed to a bill on gun waiting periods he vetoed Monday and returned to lawmakers with a host of amendments to include a number of proposals including one to reinstate the death penalty for some crimes. That measure is seen by most as a non-starter, although Madigan has scheduled a legislative hearing on the matter next week.