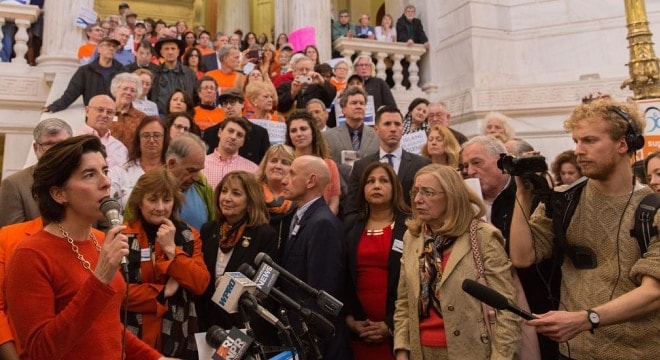 Rhode Island Gov. Gina Raimondo, seen here addressing a group of gun control advocates at the State House in March, could soon have a couple of new firearm bills on her desk. (Photo: RI Governor’s Office)

Lawmakers in Rhode Island’s Democrat-controlled Senate panel on Thursday unanimously voted to move a pair of gun control bills to the floor where they could be voted on as soon as next week.

The measures — S.2292, to outlaw various bump stock devices and S.2492, to establish a mechanism to take guns from those thought to be at risk to themselves or others — were advanced by the Rhode Island Senate Judiciary Committee this week. Companion bills overwhelmingly passed the state House last month despite significant grassroots opposition.

“While federal law bans fully automatic weapons manufactured after May 19, 1986,” said S.2292’s sponsor, state Sen. James Seveney, D-Portsmouth, “the bump stock does not technically make the weapon a fully automatic firearm, even though it allows a weapon to fire at nearly the rate of a machine gun. This law would effectively ban these horrific devices in Rhode Island.”

Seveney’s proposal would place a prohibition on all types of sliding buttstocks that harness a gun’s recoil to “rapidly fire the weapon” as well as any binary trigger. Those who modify a semi-automatic firearm in the state with any of the defined devices could face as much as 10 years in prison as well as establish penalties for simple possession.

The country’s primary manufacturer of bump fire stocks is set to halt operations in the wake of numerous lawsuits over the use of the devices at the Route 91 Harvest shooting last October that left 58 dead and some 850 others injured. This came in conjunction with a flood of efforts, both legislative and regulatory, to ban the stocks and a host of other trigger devices at the federal, local and state level. Since the shooting, Massachusetts, New Jersey, Florida, Maryland, and Washington have banned bump stocks while similar legislation is headed to Gov. Dannel Malloy in Connecticut and Gov. David Ige of Hawaii.

The National Rifle Association opposes the bill, saying it “is poorly crafted” and the “only thing this is going to do is put law-abiding competitive shooters in jeopardy of prosecution.”

Senate Majority Whip Maryellen Goodwin is firmly behind S.2292, arguing the so-called “red flag” bill will help save lives by seizing guns from those thought to be at risk and displaying warning signs.

“Too often, after a mass shooting we learn about all the warning signs people saw from the shooter and wonder why they still had guns,” Goodwin said. “But the truth is, there isn’t always a legal means to stop them.”

The measure would allow police to temporarily confiscate guns and firearm permits from those deemed by a judge to be a potential threat to themselves or others. The order would be reported to the National Instant Criminal Background Check System, barring the subject from purchasing firearms from any licensed gun dealer.

The ACLU of Rhode Island has blasted the proposal for being overly broad and by nature speculative, making it ripe for potential abuse. Gun rights advocates have similar concerns.

“We oppose the bill because we feel it does not have enough safeguards in it yet,” said Frank Saccoccio, president of the Rhode Island Second Amendment Coalition. “Some of the triggering events are — you go to buy a firearm or you go to buy a second firearm. People do that all the time. Why would that trigger a red flag?”

Rhode Island Gov. Gina Raimondo earlier this year directed authorities in the state to use all legal steps to remove firearms from the home of those they feel are a danger, and has signaled that she would sign both bills should they make it to her desk. Going further, she has also called for a ban on “assault weapons.”

They’re called military style weapons because they belong in the military. It’s time to strengthen our gun laws and ban the purchase of assault weapons in RI.