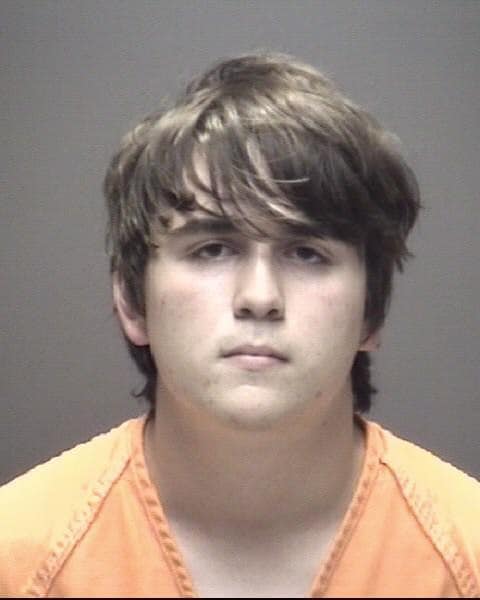 Texas authorities have released a hodgepodge of details about Friday’s shooting at a high school in Santa Fe that left 10 people dead and another 10 injured.

The suspected gunman, Dimitrios Pagourtzis, Jr, appeared in court after surrendering to police on charges of capital murder and aggravated assault of a public servant.

The 17-year-old answered “yes, sir” and “no, sir” softly as he responded to questions at his appearance. He accepted a court appointed attorney, but he did not enter a plea. He’s being held without bond in a Galveston County jail.

Pagourtzis walked into Santa Fe High School on Friday morning wearing a black trench coat concealing a Remington 870 shotgun and a .38-caliber revolver, according to an affidavit obtained by local media. Authorities received calls about an active shooter at about 7:30 am.

Multiple law enforcement agencies responded, arriving on the scene at approximately 7:45 am. Officers found multiple victims, including school resource officer John Barnes who was critically injured. Pagourtzis surrendered to police at 8:02 am inside an art classroom.

Nine students and one teacher were killed in the attack and 10 people were injured, including the police officer. Pagourtzis later told investigators that “he did not shoot students he did like so could have his story told,” the affidavit says. Authorities have not identified a motive.

Texas Gov. Greg Abbott said at a press conference Friday that investigators found journals written by the gunman that indicated he wanted to commit suicide after the shooting but was too afraid to take his own life.

Abbott also said investigators have not found any warning signs or red flags suggesting Pagourtzis was planning to hurt others. The closest thing was a picture of a “born to kill” t-shirt posted on Pagourtzis’s Facebook profile.

Abbott explained investigators found explosives on the scene and have been careful investigating other locations involved out of fear of more explosives. But he clarified that Pagourtzis took the firearms used in the attack from his father, who legally owned them.

Abbott said investigators are interviewing two other people of interest, including one person at the scene who had “suspicious reactions” to the incident.

Lt. Gov. Dan Patrick said during Friday’s press conference the school staff did everything they could to protect the students and added that the Santa Fe school district was one out of 186 to win a safety award.

“There were two officers assigned to this school plus a roving officer,” Patrick said and explained the town’s police chief was actually on his way to the scene. “In fact, it was the chief who was able, we understand, to pull back the one officer when he was shot and pull him to safety and return fire.”

Authorities said they’ll release more information when more about the incident is understood. The governor also said he’s planning to host a roundtable discussion to search for legislative solutions to prevent future incidents.

“We need to do more than just pray for the victims and their families. It’s time in Texas that we take action to step up and make sure this tragedy is never repeated ever again in the history of the state of Texas,” Abbott said.