Creeping around an underground labyrinth filled with booby traps and hidden dangers armed only with a .45. You just defined a Tunnel Rat.

As covered in the above 1967 short film by the Army, soldiers deployed to Southeast Asia poke around a newly discovered tunnel complex in an effort to reap any intelligence that may have been left behind by the (hopefully) former Viet Cong occupants.

Equipped with an M1911A1 and a Fulton MX991/U anglehead flashlight that put out an impressive 5 lumens of moonglow, so-called Tunnel Rats squeezed down the narrow underground passages that could contain high-value targets including bunkers, headquarters and storage facilities located near, or in some cases even under, American and Allied installations.

But there were efforts to provide a more purpose-built handgun for the job.

In 1966, the Army made a half-dozen tunnel rat kits that included a suppressed Smith .38 with downloaded ammunition for use by these underground gladiators. However, they weren’t liked and weren’t really all that silent due to the escaping gas from the cylinder. 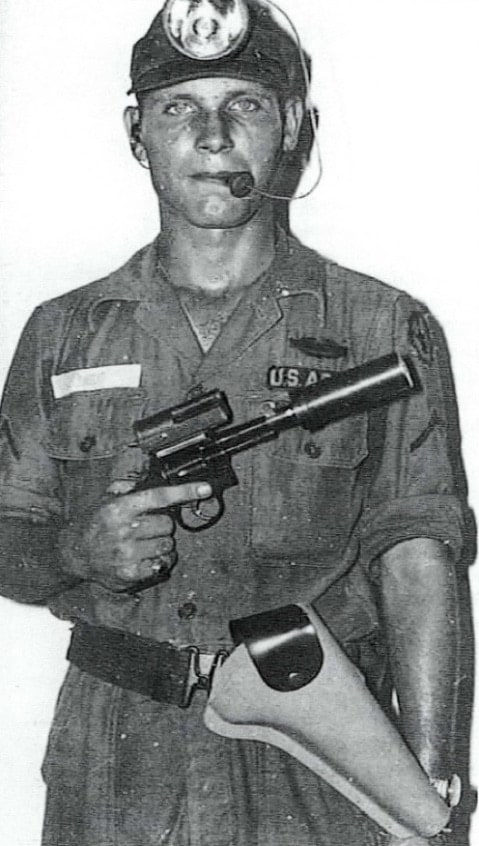 A soldier poses with his Tunnel Exploration Kit, consisting of a silenced .38 S&W, special holster, and a bite-switch activated headlamp. Great trigger D by the way.

Another attempted solution was the 1969-era Quiet Special Purpose Revolver, a Smith & Wesson Model 29 .44 Magnum that was chambered for a very low power .410-ish shell filled with 15 tungsten balls in a plastic sabot. Since the ammunition itself had about as much powder as a 4th of July party popper, the gun was fitted with a short smoothbore barrel and did not need a suppressor. Just 75 of the guns were made. The QSPR snubby .410 and one of its short-range shells, and yes, that is the whole gun.