Age is just a number when it comes to dedicated turkey hunters chasing longbeards in the Spring.

In the above piece from WJFW, Merrill, Wisconsin’s Marie Skic speaks of her love of the outdoors and hunting. The spry 90-year-old has been heading to the woods for the past seven decades and, with 28 grandchildren and 22 great-grandchildren, she has lots of hunting buddies to choose from.

“She doesn’t want to go home until she gets whatever she’s after. There’s times where we’re in the blind by 5:30 am and it’s getting dark at night and we’re still turkey hunting,” said Marie’s son, Wally Skic.

Shrugging off Butterball, just two hours into this Spring’s turkey season, she bagged a 23-pound bird. 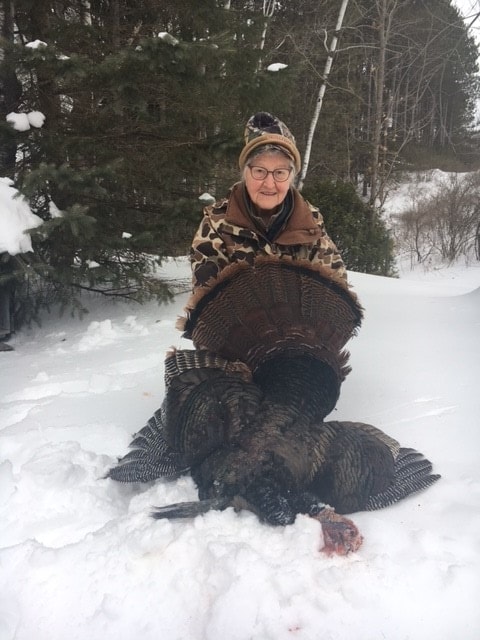 Local Merrill resident, 90-year-old Marie Skic, shot this turkey on opening day of her season, April 18. The turkey weighed 23 pounds, had one-inch spurs and a nine-inch beard. Her son, Wally Skic was “calling in” turkeys for her. (Photo/Caption: MerrillFotoNews)

And she isn’t the only one.

In Raymond, Maine, 86-year-old Lou Haskell was in the woods just before dawn on opening day with his 12-gauge shotgun, a Mossberg 835. Timing knee replacement surgeries so that he would be ready for the start of the season, the Portland Press Herald followed him to the woods to get his story.

Shortly after 7 a.m., there’s a distant gobble. Haskell tries his gobbler call again. As the minutes pass, it seems the gobble from outside gets closer. Or maybe not. He drinks coffee and waits. Then at 7:40 a.m. comes the sound of a hen and a sudden ratcheting up of gobbles, close by. Peeking out of the blind, Haskell spots the tom, about 18 yards away, its blue-hued feathers gleaming in the morning sun. His gun goes up within seconds and the shot resounds through the blind.

Scratch another turkey, one of many Haskell has harvested since age 14.

In a third story, NYUp has David Detlor, of Baldwinsville, New York, who has gone hunting wild turkey every spring and fall since 1973. At 92, he is taking a physician-approved break from his chemo treatments for cancer to make sure he can chase Big Bird this year.