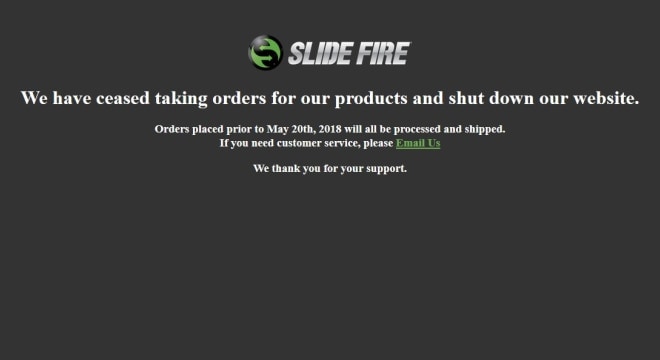 Slide Fire posted the notice on their website on Sunday (Photo: Screenshot)

The company, the primary manufacturer of bump stock devices in the country, advised that orders placed prior to midnight on May 20 would be processed and shipped but did not address any warranty concerns other than to direct those who need customer service to an email address.

“We thank you for your support,” the company said simply in a statement. Slide Fire’s social media page remained up, although it has not been updated since May 3.

The company, who holds itself as the “sole patent holder of bump fire technology” with numerous patents registered, is named as a defendant in a litany of lawsuits over the use of bump fire stocks at the Route 91 Harvest shooting last October in Las Vegas that left 58 dead and some 850 others injured. This came in conjunction with a flood of efforts, both legislative and regulatory, to ban the stocks and a host of other trigger devices at the federal, local and state level.

Since the news broke of the device’s use in the Las Vegas shooting and looming bans, demand has run high, with Slide Fire frequently announcing on their website that they were suspending new orders until they caught up. The company has also removed the list of retailers who stock the devices from their site – a move noted by the Brady Campaign, a gun control organization behind one of the class action suits.

Slide Fire, based in Moran, Texas, has been granted numerous patents for their stocks over the past decade and has defended their virtual monopoly in the marketplace, forcing competitor Bump Fire Systems out of business two years ago after a lengthy court battle. Approved by the Bureau of Alcohol, Tobacco, Firearms, and Explosives in 2010 under the Obama administration, the bump fire stock marketed by Slide Fire was pitched to increase firearms accessibility for those with limited mobility among other uses.

Slide Fire’s founder and CEO, Jeremiah Cottle, holds nearly a dozen firearm-related patents and hasn’t elaborated on his plans for the future. “I built something, and a madman is taking it all away,” Cottle, an Air Force veteran, told Bloomberg Businessweek in the aftermath of the Las Vegas shooting that brought negative attention to the niche accessory and the company he founded in 2000.

An estimated 280,000 to 520,000 bump fire stocks are in circulation, according to federal regulators.