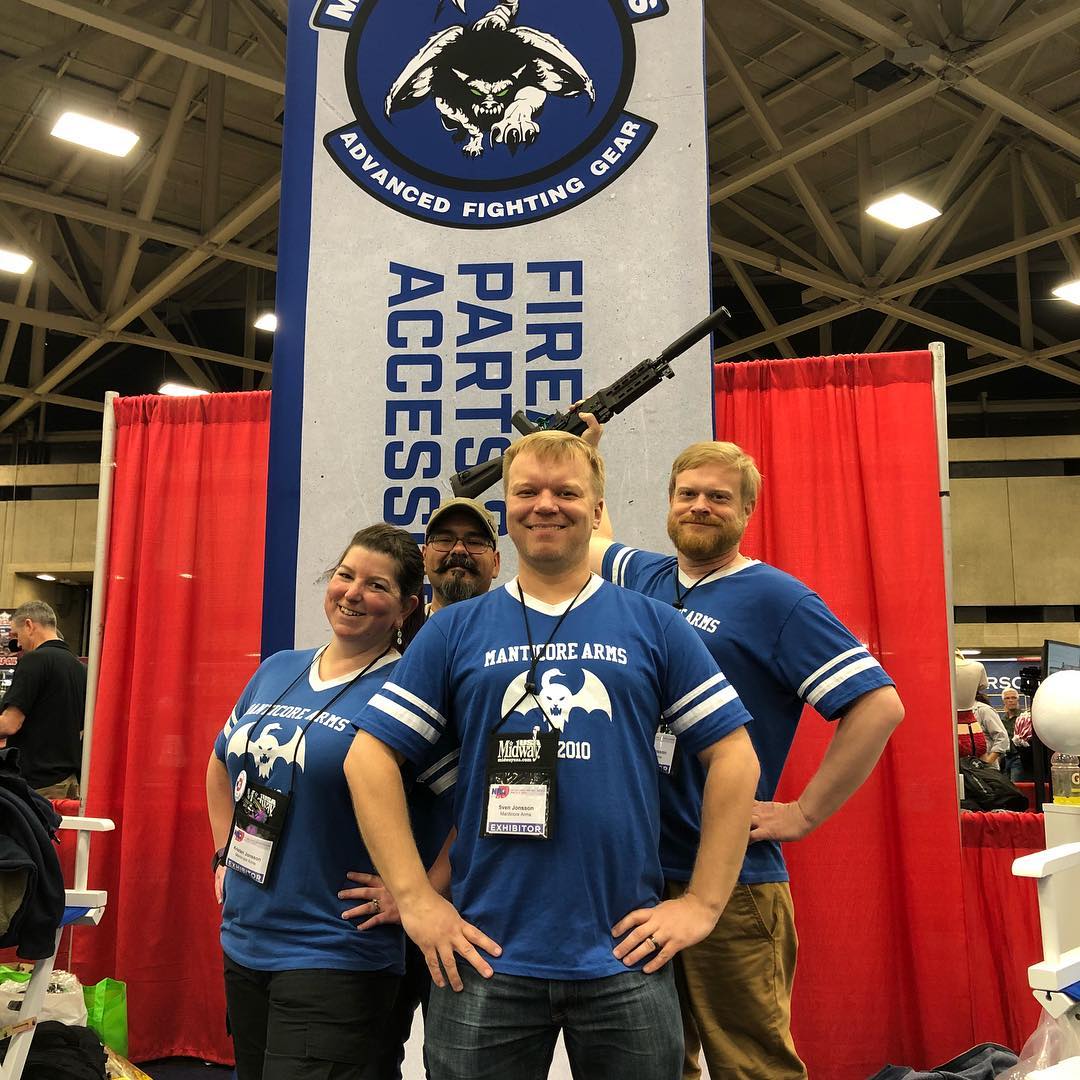 Founder Sven Jonsson, center, stands with Manticore employees on the last day of the NRA’s Annual Meeting held in Dallas in May 2018. (Photo: Manticore Arms via Facebook)

Manticore Arms, currently based out of Illinois, brings a flare to the aftermarket accessory arena with aesthetically pleasing parts designed for a bevy of atypical guns that won’t leave consumers penniless in the buying process.

Formed in early 2010, Manticore Arms first developed an improved charging handle for the Steyr Aug. Launched later that year, Manticore’s Sven Jonsson said the majority of time in the early days of Manticore was spent learning the process.

“We saw a niche in the market where smaller run guns, i.e. things like the Steyr AUG, were not receiving aftermarket support and upgrades unlike the mass market guns like the AR-15,” Jonsson told Guns.com. “Most of the time (during the early days) was spent learning the specific 3D software that we now use for everything, building the initial molds and getting our webstore set up.”

Starting from a one man shop, Manticore has grown into a full design and manufacturing company today. Jonsson said watching the company grow and having the freedom to bring interesting products to market has been the most rewarding part of the journey.

“We get to do things the way we want and set the course, even if it is very different from how other companies in the industry operate,” Jonsson said. “We wrap function, aesthetics and value for the price into every product. We are ‘eggheads with a love for guns’ that put that engineering and design experience to work when developing a product.”

What started with a Steyr Aug charging handle has now morphed into a variety of products for multiple platforms. Manticore now boasts parts and accessories for the AK-47 and AK-74 as well as Bren 805, Scorpion Evo, IWI Tavor X95 and SAR as well as AR-15 variants and, of course, the Steyr Aug. The shop serves up products from rail systems, stocks and braces, charging handles, safety levers and muzzle devices.

Jonsson said the company is ever evolving, not satisfied with just producing what’s already on deck.

“(The future is) continued growth and being better well known in the firearms industry, including launching some firearms we are developing,” commented Jonsson.

For now, Manticore is content introducing field gear in 2018 in the form of chest rigs, mag pouches and sling options in addition to a series of shotgun specific products.

With a focus on function and aesthetics wrapped in a value driven package, Manticore continues to push forward engineering and developing an array of designs for consumers who appreciate a little outside the box thinking that doesn’t entirely break the bank.

“If you want accessories or upgrades with good looks and a well thought out designs for a great price we are your people!” Jonsson said.