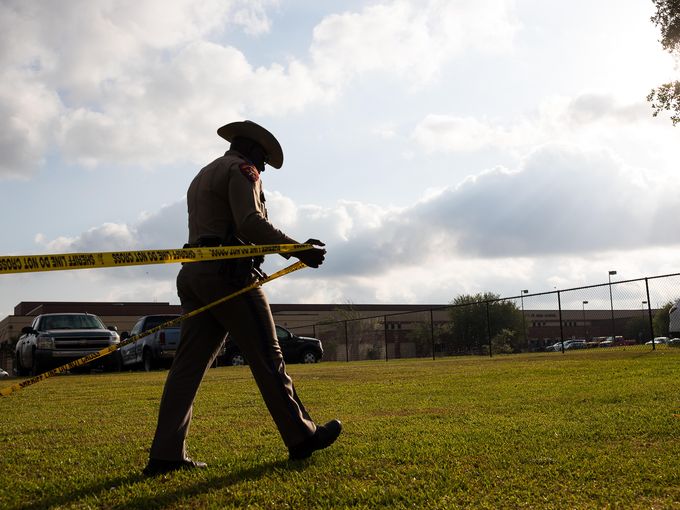 School officials in Texas denied reports about coaches and students at Santa Fe High School bullying the teenager who killed 10 and wounded 13 others last week.

“Administration looked into these claims and confirmed that these reports are untrue,” the statement says. “With respect for the bereaving families, faculty, and community, please remain mindful of information and how it is communicated. In moments of despair, it is most important we stand together and lean upon one another to get through these tough times.”

Pagourtzis surrendered to police outside an art class just after 8 a.m. Friday, 30 minutes into a shooting spree that left eight students and two teachers dead. School Resource Officer John Barnes underwent emergency surgery for a shotgun blast to the arm and remains in critical condition.

Police charged Pagourtzis with capital murder and aggravated assault against a public servant. Investigators said the Remington 870 shotgun and .38-caliber revolver used in the attack belonged to the his father, though it remains unclear how he gained access to the firearms. A lawyer representing the family released a statement over the weekend expressing their shock over the incident.

“While we remain mostly in the dark about the specifics of yesterday’s tragedy, what we have learned from media reports seems incompatible with the boy we love,” the statement says.

Sadie Rodriguez, the mother of Shana Fisher, told the Associated Press she thinks the gunman targeted her daughter after she repeatedly rejected his romantic advances — though law enforcement has yet to release an official motive for the attack. A police affidavit indicates the shooter spared students he liked so they “could tell his story.”

“We are all feeling the grief of this horrific event,” said Dr. Leigh Wall, Sante Fe ISD Superintendent, in a news release Friday. “We are committed to ensuring that our students, family and staff receive the care and support they need during this tragic time.”

The high school will remain closed through Tuesday as federal investigators gather evidence.