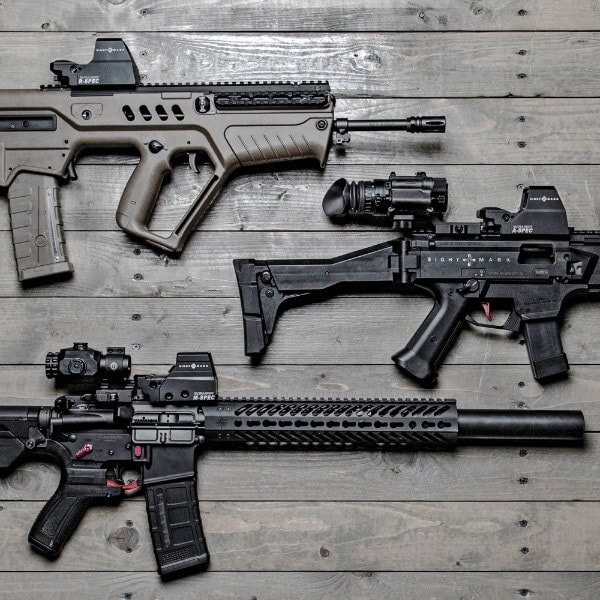 The Ultra Shot series gets an update with the new RAM Series. (Photo: Sightmark)

The RAM Series offers three models in total — R, A and M-Spec. The newest sights were designed for close-range use by both civilians as well as law enforcement and military operations. Created for use on the AR platform and shotguns, the RAM series are powered by a CR123A battery providing between 200 and 2,000 hours of battery life. The sights deliver a wide lens for quicker target acquisition that also aids in sustaining a wide field of view.

The Ultra Shot R-Spec, created for target shooters and hunters, offers four reticle options with red or green illumination. Equipped with a new low battery indicator, the reticle now blinks when the battery is low. Featuring 10 brightness levels and slotted for windage and elevation adjustments, the sight retails for $155.

The Ultra Shot A-Spec is constructed from aluminum and shockproof up to 8-feet. The A-Spec supplies the same updates as the R-Spec, but expands its features to include six night vision settings. This addition allows the A-Spec to work alongside night vision devices. The A-Spec comes in at $179.

Rounding out the series is the M-Spec LQD and M-Spec FMS models. Created for law enforcement, hunting and competition settings, the M-Spec series is waterproof up to 40-feet and can handle up to .50 BMC caliber recoil. The fixed mount M-Spec offers motion sensing activation with five minute shutoff with motion activation and 12-hour auto-off to conserve battery life.

The reflex sight also features an integrated retractable sunshade that reduces lens glare. The shade also works to protect the optic from the elements. The quick detach model provides an improved QD lever, maintaining a low profile that prevents the sights from snagging on gear or unlatching during fire. The M-Spec FMS retails for $ $239 while the LQD is priced at $299.