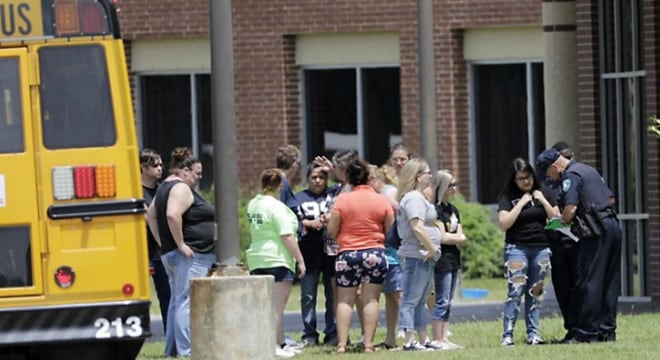 Although the weapons used to kill 10 at Santa Fe High School last week were not of the type regulated by proposed gun restrictions, some are undeterred in continued calls for a ban on assault weapons.

Reports from the Texas high school have the 17-year-old gunman armed with a pump-action shotgun and a .38-caliber revolver that were legally owned by his father. Nonetheless, advocates for a sweeping ban on semi-autos, such as the AR-15 and others, have increased their demands for gun control measures that include a ban on “black rifles” and the like.

House Democratic Whip Steny Hoyer forecast that school shootings would endure without such a federal prohibition, saying, “Until Republicans in Congress stop blocking meaningful action on gun violence and instead work together to enact commonsense background check laws and ban the most deadly assault weapons, none of us can truly expect this carnage to lessen.”

Hoyer’s words were echoed in the Senate where Dianne Feinstein, author of the initial federal assault weapon ban, stated plainly that, “The time for an assault weapons ban, universal background checks,’red-flag’ laws & a ban on bump stocks is NOW!”

While state and federal assault weapon bans focus primarily on rifles while pistols and shotguns only regulated in part, data from the FBI shows that year over year for the past half-decade more homicides are attributed to handguns by far than any other weapon. In fact, rifles account for fewer murders on average than blunt objects or “personal weapons” such as hands and fists. It should be noted that the assailants in at least two high-profile mass shootings — the 1991 Luby’s shooting and the 2007 Virginia Tech shooting — exclusively used a pair of handguns each to kill 23 and 31 people, respectively.

Shotguns, typically seen as among the most pedestrian of firearms found in the country’s home gun racks and in the hands of hunters and sportsmen alike, are rarely targeted in bans, with exceptions made for those with “military features” that have gotten negative publicity. Even avowedly pro-gun control Vice President Joe Biden championed the use of a shotgun as the staple home defense article while slamming AR-15s in the same breath.

Still, media giant USA Today piqued their ongoing coverage of the Santa Fe shooting over the weekend with a headline that described the killer’s weapons as “less lethal,” a term associated with pepper spray and tasers.

Po Murray, chair of Newtown Action Alliance, released a statement Monday that acknowledged the Sante Fe High School shooter “used his father’s shotgun and a .38 revolver to kill 10 students and educators and injure others,” then proceeded to demand that Republican House Speaker Paul Ryan hold a vote on 56 gun control bills, with a pending assault weapon ban on the top of the list. The ban would regulate neither of the weapons used in Texas.

As for gun rights groups, their take on the argument over bans and more regulation on firearms in the aftermath of a horrific mass shooting that it is just a blame game that never loops back around those who actually pulled the trigger.

“They are so preoccupied with demonizing gun owners and eroding the Second Amendment that they have either lost sight of the goal of taking dangerous or deranged criminals off the street, or that was never their intention in the first place,” said Alan Gottlieb, with the Citizens Committee for the Right to Keep and Bear Arms. “If all they can do is blame innocent citizens while diverting attention from murderous monsters, then it is time to ask these people just whose side they are on.”