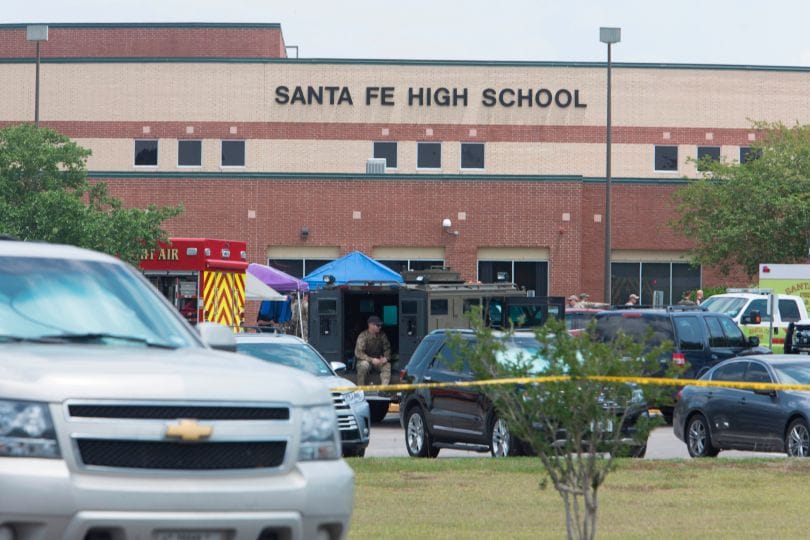 Emergency crews gather in the parking lot of Santa Fe High School where 10 people were killed and 13 wounded on May 18, 2018 in Santa Fe, Texas.  (Photo: Daniel Kramer/AFP/Getty Images)

Officials in Texas said Santa Fe High School will remain closed this week as the investigation into a mass shooting that claimed 10 lives Friday continues.

Classes will resume May 29, the district announced at a press conference Monday afternoon. The Texas Department of Public Safety and the Santa Fe Independent School District Police Department will provide beefed-up security for returning students.

In the meantime, authorities will continue gathering evidence at the suburban Houston school while local officials dispel rumors about the investigation.

“Objective criminal investigations of this magnitude are complex, arduous, and time consuming,” Santa Fe ISD Police Chief Walter Braun said during Monday’s press conference. “Considerable time must be taken to painstakingly separate fact from fiction and the truth from rumors.”

According to a police affidavit, 17-year-old Dimitrios Pagourtzis, Jr. killed eight students and two teachers with his father’s shotgun and .38-caliber revolver during a 30-minute shooting spree Friday morning. He surrendered to police just after 8 a.m. in a hallway, unable to commit suicide as he’d planned.

Thirteen others, including School Resource Officer John Barnes, suffered injuries during the attack. Barnes underwent emergency surgery for a shotgun blast to the arm and remains hospitalized.

Galveston County Sheriff Henry Trochesset told reporters Monday he doesn’t think any of the victims were killed by police fire, though autopsies are pending.

“There were minimal shots fired, at least from us, from law enforcement,” he said. “But the individual was still trying to shoot us.”

Police charged Pagourtzis with capital murder and aggravated assault against a public servant. He’s in solitary confinement on suicide watch at the Galveston County Jail. Few other details surrounding why Pagourtzis snapped have emerged in the days since, though his family and other students have alleged bullying may have played a role. The police affidavit even indicates Pagourtzis spared students he liked “so they could tell his story.”

The district denied the bullying claims in a Facebook statement over the weekend and requested “mindful” dissemination of information out of respect for the bereaving families.

Gov. Greg Abbott — who will host a roundtable discussion this week on school security measures — ordered flags lowered to half-staff and issued a statewide call for a moment of silence Monday morning.

“The act of evil that occurred in Santa Fe has deeply touched the core of who we are as Texans,” he said. “In the midst of such tragedy, we pray for the victims and those mourning in Santa Fe, while we work to ensure swift and meaningful action to protect our students in schools across our state.”