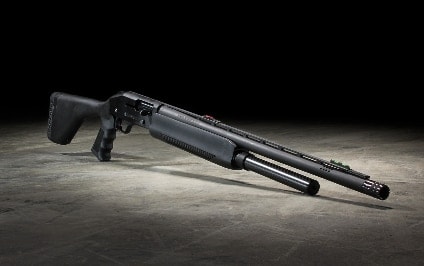 The mag extensions are lighter than traditional extensions. (Photo: TacStar)

“These extensions are about four times lighter than traditional steel tubes; however, they are much stronger,” TacStar said in a news release. “The carbon fiber offers durability and toughness to go along with lightweight, making it the perfect material for extension tubes.”

The mag extensions boast a high visibility follower, machined from solid aluminum, to improve overall feeding in addition to a barrel magazine clamp. Extensions are available in seven-, eight- and 10-shot capacities with the seven-shot adding two rounds, the eight-shot adding rounds and the 10-shot adding five rounds to overall capacity on Benelli and Mossberg shotguns.

TacStar says the extensions, which are easy to install, are in stock through Lyman and retail for $79.