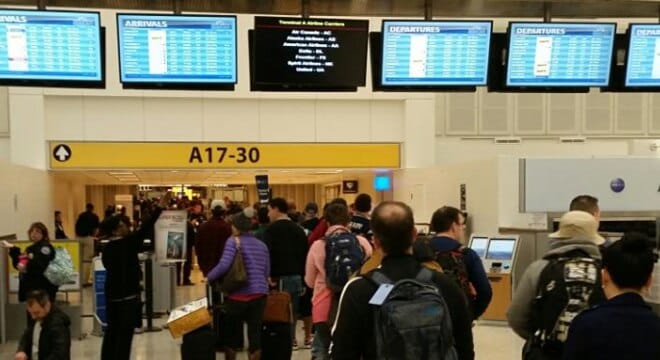 Last October, three officers with the Bellevue, Washington, Police Department had flown from Houston to Seattle on United Airlines, but when they landed found their guns had been stolen. (Photo: George Bush Intercontinental Airport, File)

A Texas airport employee on Monday pleaded guilty in federal court to the theft of three handguns from police officers catching flights out of the airport.

Mack Stewart, 22, appeared before a U.S. Magistrate Judge in Houston and entered a guilty plea to a single charge of possession of a stolen firearm, a crime that can lead to 10 years in federal prison and a possible $250,000 fine.

According to court documents, last October Stewart removed three pistols from the luggage of a trio of Bellevue, Washington, Police Department officers traveling from Houston’s George Bush Intercontinental Airport, where he worked as a contract baggage handler. The guns included a Glock 19 9mm, Heckler & Koch P30 .40-caliber, and a Springfield XD 9mm. The officers noted the guns missing when they landed in Washington and reported them stolen.

A press release from the Bureau of Alcohol, Tobacco, Firearms, and Explosives, said that Stewart was pulled over at a traffic stop about a month after the guns were stolen and was found to have one of the pistols with him. He later admitted to stealing the guns.

The case is not the first in recent years to involve baggage handlers and firearms. A former baggage handler at Austin’s Bergstrom International Airport was sentenced to 18 months last year for stealing guns from checked luggage, some of which he later traded for marijuana. In 2014, police arrested a Delta Airlines baggage handler involved in a gun smuggling ring that flew 129 guns from Atlanta to New York City. In that case, the employee used his airline credentials to avoid passing through TSA screening checkpoints.

Free on bond, Stewart’s sentencing is set for September.