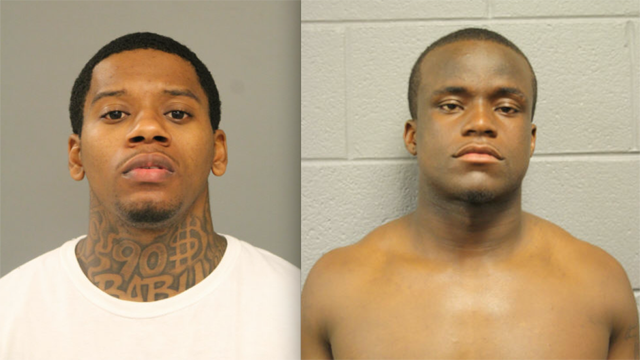 John Phillips of Hillside (left) and Jaiqail Wright of Chicago were charged with Christopher Henderson (not pictured) for allegedly trafficking guns from Kentucky to Chicago. (Photo: Chicago Police Department)

Jaiqail Wright allegedly brokered dozens of deals between fellow members of the Conservative Vice Lords street gang and his associates, John Phillips and Christopher Henderson, over Facebook throughout 2016 and 2017, court records show. All three men, aged 23, face up to five years in prison for dealing firearms without a license. Phillips, a twice-convicted felon, faces additional charges for illegal possession of a gun.

Police later intercepted Facebook messages between Henderson and Wright allegedly detailing brokered deals for many of the guns trafficked from the Kentucky Armslist sales. Some of these firearms turned up in crimes in Chicago and surrounding suburbs — including a carjacking just four months after Henderson and Phillips bought the gun in a Louisville grocery store parking lot.

Armslist, a popular gun selling and trading website, remains embroiled in multiple lawsuits over its culpability in putting firearms into the wrong hands.

A Wisconsin appeals court ruled just last month a lawsuit filed against the site for the 2012 shooting death of Zina Daniel Haughton and two others at a Milwaukee salon could proceed after a lower court dismissed the case in 2015.

Haughton’s killer, her estranged husband, bought a gun from an Armslist seller in a McDonalds parking lot just days before shooting her. He was under court order to stay away from Haughton at the time of her death. Her daughter later sued the website, arguing its search functions encourage illegal gun transfers between private sellers and prohibited persons, like her stepfather.