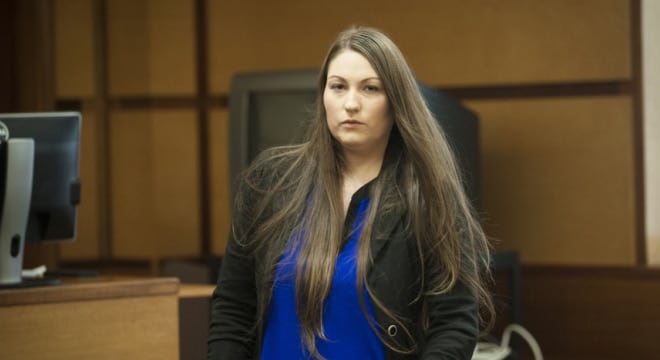 Andrea Sibley is set to serve a year in federal prison after providing at least nine guns to a triple murderer with a lengthy record. (Photo: Ariane Kunze/The Columbian)

A Washington woman who bought a series of firearms for her boyfriend, a self-professed neo-Nazi with a history of violence, was sentenced to a year in federal prison this week.

Andrea Sibley, 29, was given one year in prison and three on parole in U.S. District Court in Tacoma on charges of abetting a felon in possession of a firearm and making a false statement during the purchase of a firearm.

According to court documents, Sibley was the longtime girlfriend of Brent Ward Luyster, a swastika-tattooed skinhead with a criminal record that dated as far back as 1997. Then 19 and in college, she met him on a trip that entailed her picking Luyster up from prison. Despite knowing he was a felon and an avowed white supremacist, she remained in a relationship with him for nearly a decade, punctuated by times she left him due to domestic violence.

She provided Luyster with at least nine firearms purchased from area gun stores and private parties between March 2015 and March 2016 under her name and her parents’ address.

One of those firearms he used to pistol-whip his ex-girlfriend and shoot at her in front of Sibley. Prosecutors argued he later fatally shot three of his own friends –Joseph Mark Lamar, Zachary David Thompson, and Janell Renee Knight — in a rural home in 2016 over concerns they were talking to federal investigators about the pending assault charge on the ex-girlfriend.

Following the triple murder, Sibley helped Luyster go on the lam, though she later told investigators she did not know at the time he had killed anyone. After Luyster was taken into custody by authorities, Sibley pleaded guilty in a state court to rendering criminal assistance to her boyfriend and was given 57 days time served and a year on community custody last September.

Still professing his innocence, Luyster was convicted of triple murder charges last November. He was subsequently sentenced to three consecutive sentences of life in prison without the chance of parole.

Hit with a slew of federal weapons charges, Sibley entered into a plea agreement with the court just after Luyster’s murder conviction. Federal prosecutors sought an 18-month sentence versus the maximum 10 year punishment, citing her personal lack of criminal history outside the scope of her relationship with the neo-Nazi.

“This defendant lied repeatedly to provide multiple powerful firearms to a man with a horrible history of violence,” said U.S. Attorney Annette Hayes in a statement. “Each time she walked into a gun store and lied she let herself become part of a terrible crime. We will hold accountable all those who fail to comply with the laws meant to keep guns out of the hands of prohibited and dangerous persons.”

Besides the normal conditions Sibley is required to meet during her three years of supervised release, the court has ordered she undergo Moral Reconation Therapy, a treatment designed to increase moral reasoning skills.