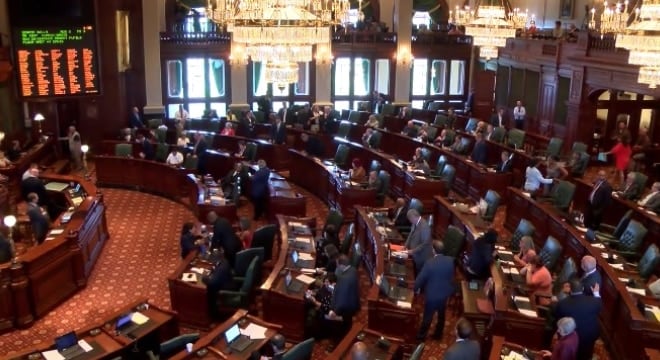 Legislation to allow the temporary seizure of firearms from those thought to be at risk to themselves or others moved forward Wednesday in both states.

The Illinois measure, HB 2354, was approved 80-32 with bipartisan support in the House, sending it to the state Senate for further review. Under its guidelines, law enforcement or the family of an individual could petition the court for a six-month ban on gun possession.

“It seems like every time we learn about a mass shooting, we learn after the fact that law enforcement officials or the shooter’s loved ones were concerned about the state of their mental health,” said state Rep. Natalie Manley, D-Joliet, the bill’s sponsor. “Oftentimes, there was no recourse available to them to stop their dangerous future actions.”

The proposal would establish what would be termed a Lethal Violence Order of Protection that, if granted by the courts, could allow police to take a person’s guns as well as their Firearm Owner’s Identification card, needed to possess a firearm in Illinois.

While a number of House Republicans supported the measure, calling it a model for the country while protecting Second Amendment interests, Rep. Allen Skillicorn, R-East Dundee, said he was against it over grounds it would be “too restrictive” and rife for abuse by those seeking to use it vindictively.

The National Rifle Association is opposed to the bill.

In The Bay State on Wednesday, HB 4517 passed the House 139-14 despite calls from gun rights groups that it was both cruel and dangerous. Broad in scope, it would allow current and former romantic partners, family, roommates and police to seek an extreme risk protection order, suspending someone’s gun rights and firearm license for up to a year.

“Massachusetts is a national leader on the issue of responsible gun legislation, and this bill provides family members with a way to temporarily remove dangerous weapons from the hands of those who pose a risk to themselves and others,” said Rep. Marjorie Decker, a Cambridge Democrat who last year called having a gun license a “privilege.”

The Gun Owners Action League earlier this week blasted the proposal as a confiscation bill that offers no help for those in need of mental health treatment or at risk of suicide. Further, GOAL’s executive director, Jim Wallace, said the measure’s tenets that aren’t simply duplicative of current law are “too vague, and have virtually no standards of evidence or protections for the accused. It’s a constitutional nightmare.”

In an alert, the NRA cautioned HB 4517 allows for ex parte proceedings where the accused does not have to be present to lose their gun rights and that law enforcement is not required to return seized firearms after the order expires.  In addition, the proposal would require those who wish to possess a stun gun or taser first acquire a firearms license.

The bill proceeds to the Senate for further consideration and, as in Illinois, has the support of both local and national gun control groups.

MA continues to enact commonsense gun legislation saving lives. Thank you @SpeakerDeLeo for continuing to lead the nation and thanks to @MomsDemand @Everytown @stophandguns @MACoalitionPGV for your tireless advocacy. pic.twitter.com/fGExpHM0TA