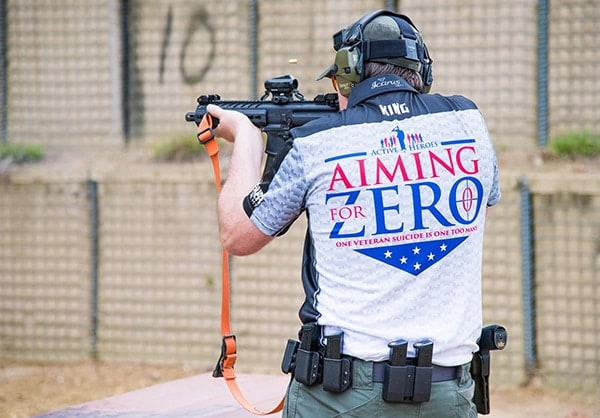 A shooter competes in the Aiming for Zero Charity Match to raise funds for the Active Heroes Foundation. (Photo: Sig Sauer)

Guns and ammo maker Sig Sauer successfully raised over $45,000 in funds for the Active Heroes Foundation through its annual Aiming for Zero Charity Match.

Aiming for Zero is part of the Active Heroes Foundation whose mission centers around preventing and reducing veteran suicide while also assisting military families. The organization offers physical, educational and emotional programs to help veterans and their families readjust to life post-deployment. The foundation also offers help to veterans suffering from Post-Traumatic Stress Disorder or depression.

“We are grateful for the sacrifice our soldiers and Marines and their families make to protect our freedoms, but we are also all too aware of the difficulty these heroes can face when they return from the battlefield. At Sig Sauer we are committed to the men and women of the Armed Forces at every stage of their service and want to ensure they have the resources, and the support, they need to overcome any challenge they may face,” Tom Taylor, Chief Marketing Officer and Executive Vice President of Commercial Sales at Sig Sauer said in a news release.

This was the second year of the charity match and all signs point to it continuing in the future.