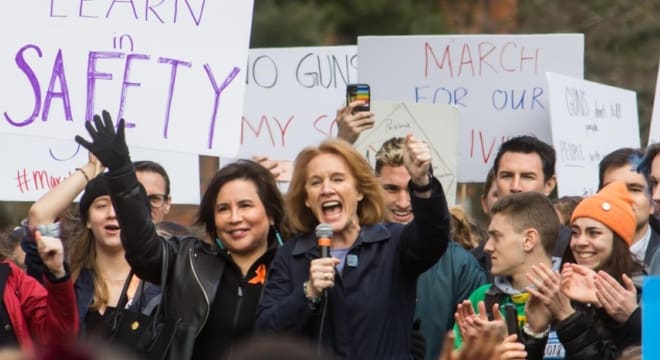 Durkan’s announced Thursday she had sent a package of proposed ordinances to the City Council that would establish mandatory gun lock laws in the city and increase penalties for failure to report lost or stolen firearms to the police. Durkan, a Democrat who was endorsed by a wide range of gun control groups in her election campaign last year, cited both national gun politics and public safety in announcing her proposal.

“With Congress in the grip of the D.C. gun lobby and too many state legislatures failing to act, our cities must lead the way – and we must all continue to demand action that saves lives,” said Durkan in a statement. “The roots of gun violence are complex, but we know that unsecured, unsafely stored guns help fuel this crisis of violence because they are more likely to cause tragic accidents, fall into the wrong hands, or be used in suicides.”

Durkan’s ordinance, proposed with input from Seattle City Attorney Pete Holmes, Councilmember M. Lorena González and unnamed “safety advocates,” would establish a range of civil fines between $500 and $10,000 for those who leave unsecured firearms in areas where minors or those considered “at risk” may find them. Additionally, it would require those who find that they have lost a gun or had one stolen to notify police within 24 hours. Failure to make a report would result in fines of up to $1,000.

“Curbing unauthorized access to firearms is an essential element of responsible gun ownership and preventing future tragedies,” said Holmes, who has been busy defending the city from a series of lawsuits over the legality of Seattle’s controversial tax on guns and ammunition. Established in 2015 at the prompting of city leaders to provide a windfall to buttress the city’s health care costs due to gun crime, the revenue realized from the scheme has fallen well short of expectations.

The law allows a family member to file a petition with the court for a judge to decide if a subject poses a threat to themselves or others. This could lead to an order prohibiting firearms possession for up to one year and could be renewed annually. The subject of the order can request a hearing once a year to rescind the order while those filing false petitions would set themselves up for a criminal penalty.

The Seattle Times reports that area law enforcement has used the ERPO process 28 times, with 18 of those since January alone. In all, police in Seattle have seized 43 guns under court order.

“It’s very much a threat-assessment game,” said Eric Pisconski, who oversees the Seattle Police Department’s Crisis Response Unit, “We want to be careful with this because we are effecting someone’s Second Amendment rights to … possess firearms.”

Gun control groups welcomed both Durkan’s proposed legislation and the increased visibility of the seizure law.

“Change happens at every level and we are thrilled to see Mayor Durkan driving change in Seattle,” said Renée Hopkins, CEO of the Alliance for Gun Responsibility, the group that fronted the ERPO law through the ballot referendum process. “Her plan includes a comprehensive, public health and data-driven approach that will help save lives in our communities.”