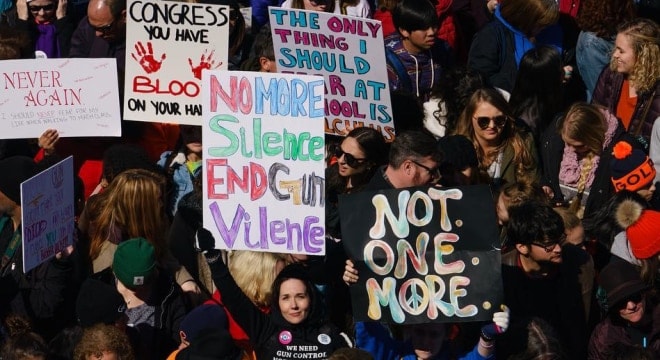 “We have all been impressed with the leadership and passion shown by students around the country on the issue of gun violence prevention,” said Crowley, a New York Democrat (Photo: March for Our Lives/Instagram)

The initiative, termed the Gun Safety Internship Program, would seek out students from Marjory Stoneman Douglas High School in Parkland, Florida and other schools “impacted by gun violence” to serve as summer interns on Capitol Hill. While spots for typical summer internships in the House are competitive and mostly involve mundane tasks such as paperwork and answering phones, the student activists picked for Crowley’s program would be specifically encouraged to play a key part in advocating for stronger gun laws.

The letter sent by Crowley to the 193 lawmakers in the Caucus announcing the program is co-signed by Linda Sanchez and Mike Thompson of California as well as Ted Deutch of Florida. All four Dems have signed on to a bill supporting universal background checks as well as a resolution to establish a House Select Committee on Gun Violence Prevention. Three out of four have signed on to a renewed federal assault weapon ban proposal, a bill to fund research of gun violence as a public health issue, and a ban on bump stocks. Deutch is also the author of a measure for the federal government to fund local gun “buy back” programs.

“We think it would be a great experience for them to be on the Hill to see exactly how things operate — or doesn’t, to some degree — but also to have time with these very special young people that have experienced something that none of us ever want to have experienced and I think we can learn from each other,” Crowley told NBC.