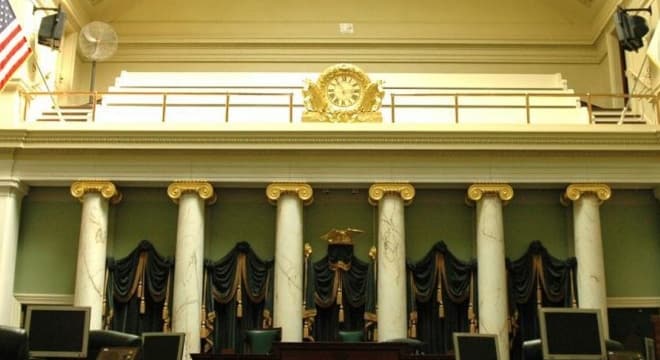 Proposals banning bump stocks and allowing for gun seizures in some so-called “red flag” cases sailed past the Rhode Island Senate on Thursday.

The bills– S.2292, to outlaw various bump stock devices and S.2492, to establish a system to take guns from those thought to be at risk to themselves or others– passed the Democrat-controlled body 33-1. State Sen. Elaine Morgan, R-Charlestown, cast the sole “no” vote against both measures.

“This bill says nothing of protecting our kids in our schools,” said Morgan of the seizure proposal. “All I see this doing is taking away and violating constitutional rights.”

The measure would allow police to temporarily confiscate guns and firearm permits from those deemed by a judge to be a potential threat to themselves or others. The order would be reported to the National Instant Criminal Background Check System, barring the subject from purchasing firearms from any licensed gun dealer. It is opposed by The ACLU of Rhode Island as well as a host of local and national gun rights groups over due process concerns.

The bump stock ban would place a prohibition on all types of sliding buttstocks that harness a gun’s recoil to “rapidly fire the weapon” as well as any binary trigger. Those who modify a semi-automatic firearm in the state with any of the defined devices could face as much as 10 years in prison as well as establish penalties for simple possession. The National Rifle Association opposes the bill, arguing it is “poorly crafted” and the “only thing this is going to do is put law-abiding competitive shooters in jeopardy of prosecution.”

The Rhode Island House approved similar versions of the measures in April and now has to concur with the Senate bills, a step that will put the bills on the desk of Gov. Gina Raimondo who has promised to sign them.

The legislation was appaulded by state Attorney General Peter F. Kilmartin, who said, “While there is no one answer to ending the epidemic of gun violence in our country, I believe measured approaches such as the red flag law and banning bump stocks will improve public safety while also protecting the rights of legal gun owners.”

Gun control groups were on hand at the State House to support the measures.