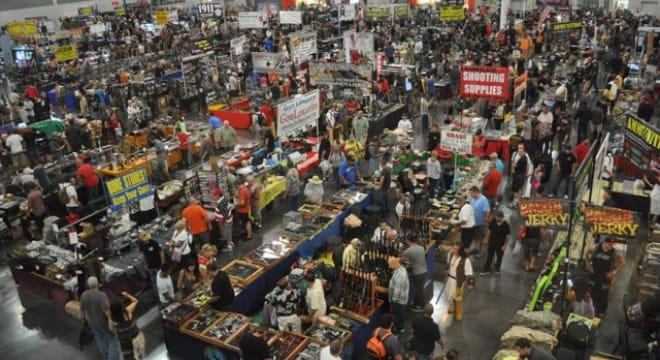 Lawmakers both state and local are turning up the heat on gun shows held in public venues on the West Coast.

The Orange County Fair and Expo Center Board of Directors met Thursday to discuss the future of gun shows at the fairgrounds and stalled a vote on rental contracts for three gun shows planned for later this year, The LA Times reported.

Although the events were cumulatively valued at over $278,000 for the county and the California Rifle & Pistol Association is pointing out that the Costa Mesa Gun Show has a perfect record of complying with both local and state laws, the fair board said they are being cautious.

“I think what we need to do is to be prudent and to be cautious and to be sensitive … and wait until we get some law enforcement guidance about licensure and those other issues that were brought up,” said Nick Berardino, who is on the board.

Orange County is not the only one pumping the brakes on gun shows. At the state-owned Cow Palace in Daly City, state Sen. Scott Wiener and state Assemblyman Phil Ting — both Democrats from San Francisco — are backing SB 221, a bill that would specifically bar the historic arena from hosting events that would involve the sale of guns or ammunition.

“Our country is awash in guns, and schoolchildren are dying,” said Wiener in a statement announcing the bill earlier this month. “We need fewer guns, and we need to stop the proliferation of guns whose only purpose is to kill as many people as possible as quickly as possible. We should not have gun shows in the heart of the Bay Area. The Cow Palace gun shows should have ended a long time ago. Better late than never.”

State Sen. Mark Leno is warning that there will probably be “conversations” about the aging Cow Palace’s budget for a new roof tied to the bill.

Moving further south, in San Diego County, promoters of the long-running Crossroads of the West Gun Show, which generates $500,000 in annual revenue for the county, has been in a protracted fight with over their use of the county-owned Del Mar Fairgrounds.

Targeted by local activists for the past several years, gun show organizers hold they run a legal show and meet all requirements and mandates. Local Second Amendment groups have presented the fairgrounds operators with thousands of signed petitions urging them to keep the popular gun show intact. Others warn that action taken to put county spaces off-limits for legal activities could land those behind such a move in court.

“They are stepping into a lion’s den here of potential litigation over this,” gun rights attorney Chuck Michel told The San Diego Union-Tribune.

In 1997, the U.S. 9th Circuit found that a Santa Clara County Board of Supervisors’ ban on selling guns at county-run venues to “avoid sending the wrong message to the community relative to support of gun usage,” violated the First Amendment rights of gun show promoters.

Wiener’s legislation has been referred to the state Senate Committee on Public Safety.