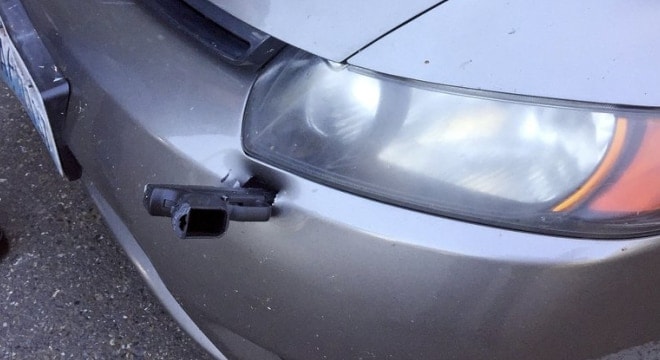 The driver reportedly observed a small “black object” flying through the air while traveling on I-5. (Photo: WSP)

The Washington State Patrol last week posted images of a Honda that had seen better days. Embedded in the import’s front end just under the driver’s side headlight was what looked to be a Springfield Armory XD pistol, muzzle first, sans magazine.

“Well this is a first…a driver saw a small ‘black object’ flying through the air while traveling on I-5,” noted WSP on social media. “When the driver stopped for gas (about 18 miles later), they saw this stuck in their bumper.”

They report that troopers recovered the handgun and turned it over to the Lakewood Police Department, who are investigating the matter.

“We’re glad the driver – and everyone else on the road – was okay!” said WSP.