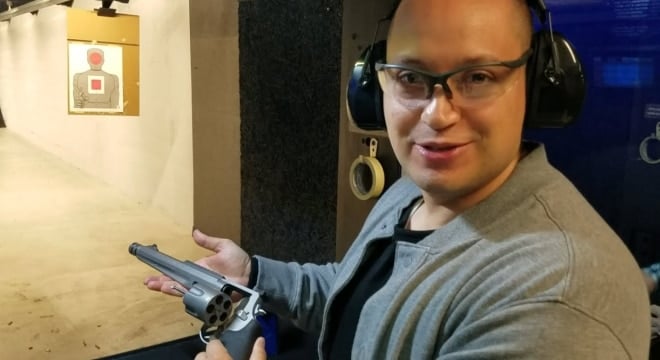 Goodman with his newly-acquired S&W .500 which he calls as a “catharsis” to shoot and a “testament to the Second Amendment.” (Photo: YouTube)

After penning articles advocating gun control, the author now sees the “benefits of an armed populace.”

Freelancer H.A. Goodman, who in 2016 was a die-hard Bernie supporter and had previously contributed to the Huffington Post, Salon.com and others, had a byline associated with a series of articles espousing gun control including at least one that scoffed at the logic behind the Second Amendment being a sort of Constitutional insurance policy against a tyrannical government.

“The view propagated by the NRA that gun ownership keeps the federal government ‘in check’ is not only historically inaccurate, but also contrary to the actions of our Founding Fathers,” Goodman wrote in 2014.

These days, he has changed his mind and has joined both Gun Owners of America and the National Rifle Association, “because the groupthink that I once spewed hurts law-abiding citizens and does nothing to prevent the next deranged copycat criminal,” as well as started a YouTube-based gun review vlog.

In an opinion piece published this week by The Daily Caller, Goodman said current events changed his thinking.

“After witnessing the union of the Democratic Party and former spy chiefs James Clapper, James Comey and John Brennan, I slowly realized my trust in the federal government had been naive,” said Goodman. “Of course, I’d never advocate an armed rebellion, but the fact 37 percent of American families own some type of firearm ensures that unelected officials think twice about the extent of their schemes. If intelligence chiefs like Brennan and Clapper can lie under oath without perjury charges, or James Comey can overlook Clinton’s private server (storing SAP intelligence) because of ‘intent,’ imagine the extent of their chicanery with a disarmed population.”

Below is one of the videos on Goodman’s gun channel, which has 3,100 subscribers. In it, he does a sort of tabletop overview of his new Smith & Wesson Performance Center .500 Magnum revolver, which he fires in other videos.

“It’s just a really beautiful firearm to shoot. It’s super enjoyable. Super fun,” he said, calling it a catharsis to shoot and a “testament to the Second Amendment.”