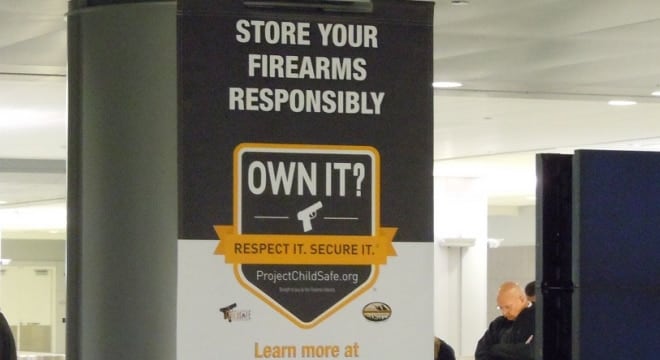 The NSSF’s “Own It? Respect it. Secure it” safety initiative featured in Gov. Abbott’s school and firearm safety plan this week. (Photo: Chris Eger/Guns.com)

Listed in the plan unveiled Wednesday by Texas Gov. Greg Abbott was a nod to the firearm industry trade group’s long-running gun safety and education program.

Abbott’s 44-page School and Firearms Safety Action Plan, compiled in response to the shooting at Santa Fe High School that claimed the lives of 10 faculty and students earlier this month, is a mix of moves to harden campuses, recognize threats before they turn violent and enhance firearms safety. Among those is recognition for advocacy promoted by the National Shooting Sports Foundation.

“The NSSF ‘Own It? Respect it. Secure it’ initiative was developed to promote and encourage firearm safety and safe storage,” noted the report, which proposes $1 million in grant funding from the Governor’s Criminal Justice Division to support NSSF activities.

The plan holds up the trade group’s ongoing Project ChildSafe campaign as a model, which according to the NSSF has distributed over 37 million free firearm safety kits since its launch two decades ago. Each kit includes a cable-style gun lock with instructions and a safety booklet.

Present in all 50 states and associated with 15,000 law enforcement agencies, ChildSafe has several links to the Lone Star State including its origins with a $1 million grant from then-Texas Gov. George W. Bush in 1999. Among its current sponsors are the Texas Dove Hunter’s Association while some 400 law enforcement agencies in the state partner to hand out the kits.

Gun control groups such as the Brady Campaign slammed Abbott’s plan, including its firearms storage advocacy.

“Providing free gun locks is important, but it’s not nearly enough and, frankly, a real investment in public education around the need for safe storage is required,” said Kris Brown, one of Brady’s co-presidents.

It should be pointed out that, while Brown’s group champions the use of gun locks and controversial mandatory storage laws, they do not provide free gun locks or safety kits.