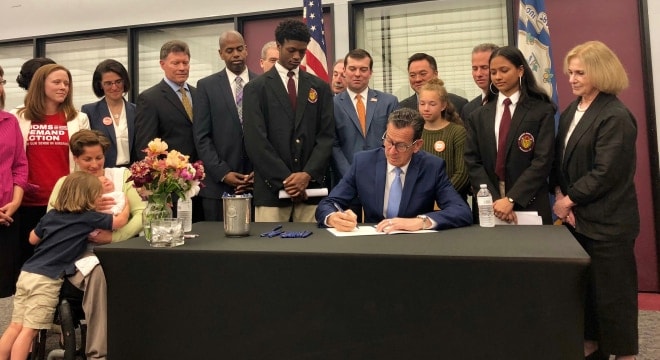 Connecticut Gov. Dannel Malloy, a Democrat with a long history of advocating gun control measures, signed a law on Thursday outlawing a variety of firearm accessories.

The proposal, HB 5542, creates a new felony for the sale and possession of a “rate of fire enhancement” as defined under the new law. It was approved last month in the state House 114-35 and the Senate 26-10, with Dems pushing hard for the bill.

“This should be the law throughout the entire country,” said Malloy during a press conference that included gun control advocates, high school students and lawmakers. “There is no reason why anyone needs to own a device that can fire 90 bullets every 10 seconds but for the mass killing of people.”

The new law, now Public Act No. 18-29, defines a “rate of fire enhancement” as any bump stock, binary trigger, trigger crank or similar device and makes it a Class D felony under Connecticut law to manufacture, own, possess, sell or transfer one. Violators could face five years in prison and a fine up to $5,000. There is no route to legal ownership or grandfathering of devices already in circulation in the state, leaving those with one on their hands until October to comply with the law.

Malloy proposed the ban to lawmakers six months ago. Now, the state joins Massachusetts, New Jersey, Florida, Vermont, Washington and Maryland that have forbidden bump stocks since their use in the Route 91 Harvest shooting last October in Las Vegas that left 58 dead and some 850 others injured. Legislation is pending in a number of other states and federal regulators are mulling a national prohibition. Meanwhile, a series of legal challenges have been filed against the bans citing gun rights violations of the Second Amendment and illegal seizure that violates the 4th Amendment.

While the country’s only factory bump stock manufacturer, Slide Fire, stopped accepting new orders last month, an estimated 280,000 to 520,000 bump fire stocks are in circulation and the technique to bump fire a gun without the aid of such an accessory is widespread.

Since taking office, Malloy expanded the state’s “assault weapon” ban and stood by it all the way to the Supreme Court, has sought to hike permit fees and tried to bar gun sales in the state to those on terror watch lists. He recently joined with several other governors to form a regional information-sharing gun control bloc of states with an aim to further the breadth of background checks for firearm applicants. The group intends to produce their own research into gun violence as a public health issue.