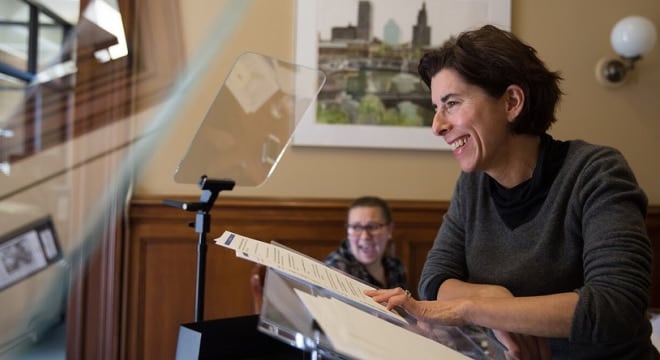 Rhode Island Gov. Gina Raimondo announced this week she would swiftly sign a pair of gun control bills sent to her by the state’s General Assembly.

The measures – S.2292, to ban various bump stock devices and S.2492, to establish a system to take guns from those thought to be at risk to themselves or others – passed the Democrat-controlled Senate last week almost unanimously while the Assembly concurred with the proposals on Thursday.

“I applaud the General Assembly for standing with our kids, teachers, law enforcement and parents across the state by taking action to strengthen Rhode Island’s gun law,” Raimondo said in a statement. “Their action to ban bump stocks and pass a red flag law will make Rhode Island a safer state.”

Raimondo, a Democrat, said she would sign the bills in a ceremony steps of the State House on Friday morning before an invited crowd of lawmakers, police and “gun safety advocates.” Friday has been declared by a number of anti-gun groups to be National Gun Violence Awareness Day.

The bump stock ban would place a prohibition on all types of sliding buttstocks that harness a gun’s recoil to “rapidly fire the weapon” as well as any binary trigger. Those who modify a semi-automatic firearm in the state with any of the defined devices could face as much as 10 years in prison as well as establish penalties for simple possession.

The National Rifle Association opposes the law, saying it “is poorly crafted” and the “only thing this is going to do is put law-abiding competitive shooters in jeopardy of prosecution.”

The seizure law would allow police to temporarily confiscate guns and firearm permits from those deemed by a judge to be a potential threat to themselves or others. The order would be reported to the National Instant Criminal Background Check System, barring the subject from purchasing firearms from any licensed gun dealer.

The ACLU of Rhode Island has blasted the proposal for being overly broad and by nature speculative, making it ripe for potential abuse while not meeting the mental health needs of someone potentially in a crisis. Gun rights advocates have voiced similar concerns.