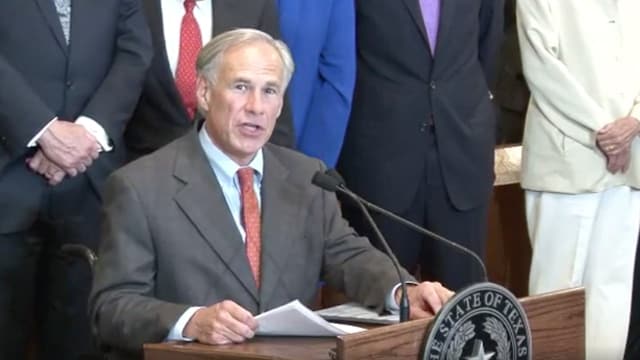 During Wednesday’s press conference, Abbott called the report “a starting point, not an ending place” and said Texas schools could implement many of the strategies before next school year while others will need legislative approval. He added the plans identify $120 million of state and federal grants that could be used immediately and that his office is working to make some $90 million more available.

The report, published Wednesday, provides some 40 suggestions for school safety and security, preventing threats, and gun storage as well as ways to fund such endeavors. A critical component of the plan is increasing armed security at schools. The report suggests collaborating with local law enforcement to heighten police presence on campuses as well as hiring more school security. Ideas include adding a police satellite office inside school buildings and expanding the school marshal programs, which trains teachers who volunteer to be armed.

Suggestions for preventing threats focused on increasing programs for mental health treatment — some of which would need legislative approval — training staff to identify warning signs and potentially dangerous individuals, and adding systems for reporting suspicious behavior.

Most of the plans for enhancing firearms safety would require legislative action. Those suggestions include improving criminal record keeping and expediting reporting periods, strengthening firearm storage laws, and mandatory reporting of lost or stolen guns.

“I doubt there has been a Texas governor with a more pro-gun record than myself … I can assure you I will never allow Second Amendment rights to be infringed, but I will always promote responsible gun ownership,” Abbott said as he listed off pro-gun legislation he had signed and cases he fought as state attorney general.

The proposals, Abbott reasoned, were introduced because in the types of cases officials are trying to prevent, the perpetrator often obtains firearms left unlocked by another person. The Santa Fe shooter had taken the guns he used — a shotgun and a revolver — from his dad.

Part of the suggested changes include revising the legal definition of a “child,” which “under current firearm storage law child means a person younger than 17 years of age. Well, the murderer at Santa Fe High School was 17 years old and thus his parents were not required by law to safely store their firearms,” Abbott said, adding the definition should be changed to 18 years old and younger.

Abbott also directed the legislature to study red flag laws — measures that would allow legal confiscation of firearms from individuals who pose a danger to themselves or others — to see how effective they are.

The roundtable discussions included a wide range of participants — including victims, students, teachers, advocates, law enforcement and safety experts — that aimed to address mass shootings in schools and elsewhere.